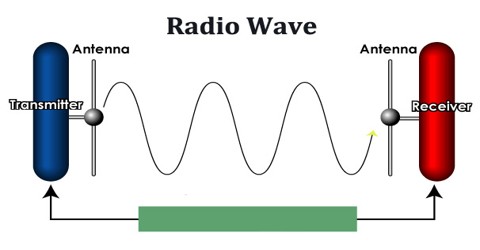 Radio Wave is a very low frequency electromagnetic wave (from roughly 30 kilohertz to 100 gigahertz). Radio-wave communications signals travel through the air in a straight line, reflect off of clouds or layers of the ionosphere, or are relayed by satellites in space. They are used in standard broadcast radio and television, short-wave radio, navigation and air-traffic control, cellular telephony, and even remote-controlled toys. Electromagnetic radiation is transmitted in waves or particles at different wavelengths and frequencies. This broad range of wavelengths is known as the electromagnetic (EM) spectrum. The spectrum is generally divided into seven regions in order of decreasing wavelength and increasing energy and frequency. The common designations are radio waves, microwaves, infrared (IR), visible light, ultraviolet (UV), X-rays and gamma-rays.

Radio waves have the longest wavelengths in the EM spectrum, according to NASA, ranging from about 1 millimeter (0.04 inches) to more than 100 kilometers (62 miles). They also have the lowest frequencies, from about 3,000 cycles per second or 3 kilohertz (kHz) up to about 300 billion hertz, or 300 gigahertz (GHz).

Artificially generated radio waves are used for fixed and mobile radio communication, broadcasting, radar and other navigation systems, communications satellites, computer networks and innumerable other applications. Radio waves are generated by radio transmitters and received by radio receivers. Different frequencies of radio waves have different propagation characteristics in the Earth’s atmosphere; long waves can diffract around obstacles like mountains and follow the contour of the earth (ground waves), shorter waves can reflect off the ionosphere and return to earth beyond the horizon (skywaves), while much shorter wavelengths bend or diffract very little and travel on a line of sight, so their propagation distances are limited to the visual horizon. Radio waves travel at the speed of light. When passing through an object, they are slowed according to that object’s permeability and permittivity.

Standing Waves – The amplitude of the wave decreases as 1/r, where r is the distance from the transmitter. At the point of reflection, the incident and reflected waves have the same amplitude, but elsewhere the incident wave has larger amplitude than the reflected one. Thus the nodes in the combined wave do not have amplitude of zero (except at the point of reflection); rather, they are local minima in the interference pattern. Electromagnetic radiation travels through space without a medium. When Lamour, Lorentz, Fitzgerald and Einstein proposed this, however, this relation was much less obvious. Wavelength and Frequency of Radio Waves

Radio propagation is the way radio waves travel or propagate when they are transmitted from one point to another and affected by the medium in which they travel and in particular the way they propagate around the Earth in various parts of the atmosphere. Practical radio systems use several different techniques of radio propagation to communicate: