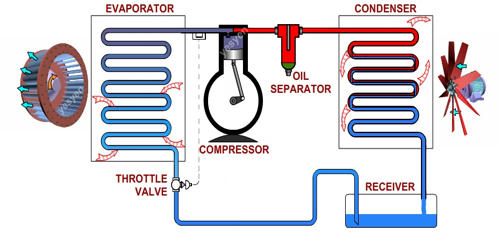 In other words, refrigeration is artificial (human-made) cooling. It is the process where a gas or liquid changes its temperature when it is forced through an expansion valve or capillary tube in an insulated system where no ambient heat transfer. The energy in the form of heat is removed from a low-temperature reservoir and transferred to a high-temperature reservoir. The work of energy transfer is traditionally driven by mechanical means, but can also be driven by heat, magnetism, electricity, laser, or other means. It is the removal of unwanted heat from a selected object, substance, or space and its transfer to another object, substance, or space. Removal of heat lowers the temperature and may be accomplished by the use of ice, snow, chilled water, or mechanical refrigeration.

Refrigeration has had a large impact on the industry, lifestyle, agriculture, and settlement patterns. It is one of the most important applications in the food industry, as it slows down the growth of bacteria in food, preserves organoleptic properties, and extends shelf life. The idea of preserving food dates back to at least the ancient Roman and Chinese empires. However, mechanical refrigeration technology has rapidly evolved in the last century, from ice harvesting to temperature-controlled rail cars. The introduction of refrigerated rail cars contributed to the westward expansion of the United States, allowing settlement in areas that were not on main transport channels such as rivers, harbors, or valley trails. Settlements were also developing in infertile parts of the country, filled with newly discovered natural resources. To summarize — heat is absorbed by the refrigerant (cooling the air) in the evaporator and expelled from the refrigerant to the outdoor air in the condenser. Cooling caused by the rapid expansion of gases is the primary means of refrigeration today. The technique of evaporative cooling, as described heretofore, has been known for centuries, but the fundamental methods of mechanical refrigeration were only discovered in the middle of the 19th century.