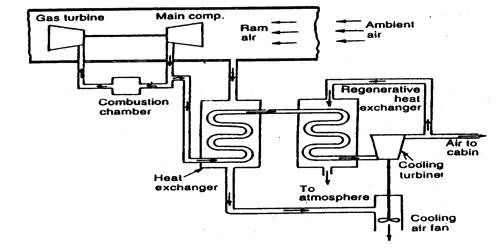 Regenerative cooling is a method of cooling gas, utilizing the rapid expansion of a compressed portion of the gas, before it becomes liquid, to cool the remainder. It is a method of cooling gases in which compressed gas is cooled by allowing it to expand and thereby take heat from the surroundings. The cooled expanded gas then passes through a heat exchanger where it cools the incoming compressed gas. It is a cryogenic method in which the rapid expansion of a portion of a gas to be liquefied is utilized to lower the temperature of the remainder.

The Principle of Regenerative Cooling

The Joule-Thomson cooling observed for mos gases is very small. Thus for air at a temperature of 20°C when the pressure on the two sides is 50 atmospheres and 1 atmosphere respectively. It was found that the temperature falls by 11.7°C. Even using a pressure of 210 atmospheres, the fall in temperature is only 42°C. But the effect is intensified by undergoing a process known as a regenerative process.

A portion of the gas that first suffers Joule-Thomson expansion and becomes cooled is employed to cool other portions of the incoming gas before the later reaches the nozzle. In this way, the cooling effect can be multiplied many times. This cumulative process used to cool a gas continuously is called the regenerative cooling.

In practice, this is achieved by using concentric tubes. Two or more concentric tubes are arranged in the form of spirals, the inner one carrying the high-pressure inflowing gas while the outer one the low-pressure outflowing gas. In the regenerative method, as lower the initial temperature the greater is the Joule-Thomson cooling.

It is a method of cooling gas, utilizing the rapid expansion of a compressed portion of the gas, before it becomes liquid, to cool the remainder. In 1857, Siemens introduced the regenerative cooling concept with the Siemens cycle. In 1895, William Hampson in England and Carl von Linde in Germany independently developed and patented the Hampson–Linde cycle to liquefy air using the Joule–Thomson expansion process and regenerative cooling. On 10 May 1898, James Dewar used regenerative cooling to become the first to statically liquefy hydrogen.