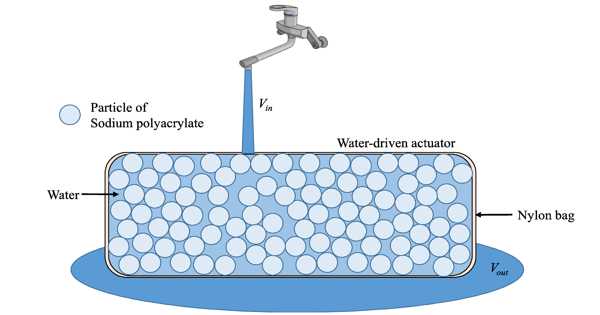 To achieve agile motions and natural camouflage in water, sea animals such as leptocephali develop tissues and organs made of active transparent hydrogels. Hydrogel-based actuators that mimic leptocephali capabilities will enable new applications in a variety of fields. However, existing osmotic-driven hydrogel actuators are intrinsically low-speed and/or low-force, and their camouflage capabilities have not been investigated.

The shape of sea cucumbers is bumpy and oblong. They are soft at first but stiffen quickly when touched. They can shrink or stretch to several meters in length, and their original shape can be recovered even after they die and shrivel up due to water uptake regulation. A POSTECH research team recently developed a soft actuator inspired by sea cucumbers’ unique behavior.

The recent rapid development of microtechnology has increased the need for the development of devices capable of performing mechanical work on the micro and macroscale. Among all types of actuators, those based on stimuli-responsive hydrogels, which are three-dimensional polymer networks that are heavily imbibed with water, deserve special attention.

The mutable collagenous tissue (MCT) of sea cucumbers inspired a research team led by Professor Dong Sung Kim, Dr. Andrew Choi (currently the director of R&D at EDmicBio, Inc.), and Hyeonseok Han of POSTECH’s Department of Mechanical Engineering to develop a water-driven self-operating soft actuator that exceeds the strength and speed of conventional soft actuators. This study was featured as the inside front cover paper in the most recent issue of the Journal of Materials Chemistry A.

Because the body of a sea cucumber is made of MCT, it can harden or soften depending on its surroundings. Sea cucumbers’ elastic modulus can change up to ten times in a few seconds, allowing them to quickly squeeze through crevices or inflate to threaten predators. The formation or destruction of hydrogen bonds in collagenous tissues is induced by controlling its chemical regulators.

An actuator is a rigid device, such as a motor or a switch, that changes a physical state by changing an electrical signal. A soft actuator that responds to water and uses water as an energy source, on the other hand, can be applied to soft robotics that requires freedom of movement. However, due to their fragility and slow speed, existing soft actuators are limited in their application.

The research team was inspired by the MCT of sea cucumbers, which can freely change shape by reacting with water, and created a programmable actuator. This actuator is based on a bulk PNIPAAm hydrogel that changes very flexibly and demonstrated 200 times (2 newtons) greater actuation force and 300 times (1/3 second) faster actuation force than conventional soft actuators that use water as an energy source – even underwater at 80°C temperature. Furthermore, it was demonstrated through several tests that the actuator was robust enough to restore the original shape even when subjected to 300 percent tensile strain.

This actuator has a wide range of applications, including industrial and biomedical fields, as well as industrial robots such as grippers that grab and lift materials like a human arm, wound closures, and artificial fingers.

“The soft robot activates when it comes into contact with moisture and is flexible and deformable, allowing it to easily adapt to different environments,” Professor Dong Sung Kim explained. “This newly developed hydrogel actuator is very powerful and actuates quickly, allowing operation even in places where electricity is not available by utilizing chemical energy.”

The Ministry of Science and ICT and the National Research Foundation of Korea funded the Mid-career Researcher Program and the Core Technology Biomedical Development Program, and the Ministry of Trade, Industry, and Energy funded the Alchemist Project.