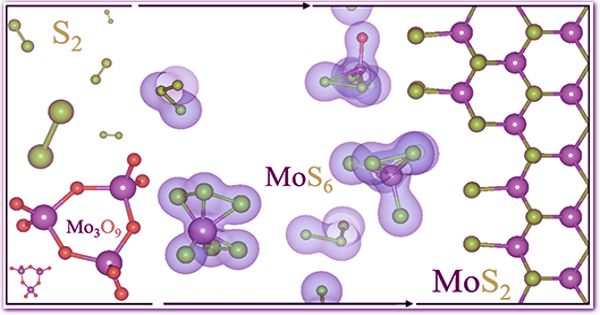 Electrides are a new class of materials in which electrons occupy a space normally reserved for ions or atoms rather than orbiting an ion or atom’s nucleus. Tunable, stable, low-energy materials have the potential to be used in nanotechnologies.

The discovery of a structural phase of two-dimensional (2D) materials was the result of an exploratory investigation into the behavior of materials with desirable electric properties. Electrides are a new class of materials in which electrons occupy a space normally reserved for atoms or ions rather than orbiting the nucleus of an atom or ion. The stable, low-energy, tunable materials could have potential applications in nanotechnologies.

The international research team, led by Hannes Raebiger, associate professor in the Department of Physics at Yokohama National University in Japan, published their findings in Advanced Functional Materials as the frontispiece.

Initially, the team set out to better understand the fundamental properties of Sc2CO2, a 2D system. The system, which consists of two atoms of metallic scandium, one atom of carbon, and two atoms of oxygen, belongs to the MXene family of chemical compounds. They are typically made up of a one-atom-thick carbon or nitrogen layer sandwiched between metal layers and dotted with oxygen or fluorine atoms.

An exploratory investigation into the behavior of materials with desirable electric properties has resulted in the discovery of a structural phase of two-dimensional (2D) materials.

MXene Sc2CO2 piqued the researchers’ interest because it was predicted that when structured into a hexagonal phase, the system would have desirable electrical properties. “Despite these fascinating predictions of hexagonal phases of Sc2CO2, we are not aware of its successful fabrication as of yet,” said Soungmin Bae, first author and researcher at Yokohama National University’s Department of Physics. “We discovered a completely new structural phase by analyzing its fundamental properties.”

New electride materials are produced as a result of the new structural phase. The central carbon plane is formed by tiled shapes in the atomic-thin 2D structural phase. The previously predicted shape was a hexagon with one carbon atom at each vertex and one in the center. The new materials are rhombus-shaped, with electrons at the vertices and a carbon trimer (three carbon atoms in a row) in the center.

While the overall shape is less symmetric than the previously reported hexagonal arrangement, the central plane is more symmetric. Raebiger claims that this structure has distinct properties as a result of the introduction of a new class of electrides.

“Carbon is one of the most common materials on our planet and is essential for living beings, but it is rarely found as trimers,” Raebiger explained. “Interstellar space is the most likely location for carbon trimers.”

The overall shape is less symmetric than the previously described hexagonal structure, but the central plane is more symmetric. According to Raebiger, this structure has distinct characteristics as a result of the appearance of the new family of electrides.

“Electrides contain electrons as a structural unit and are frequently excellent electrical conductors,” Raebiger explained. “The current electride family is an insulator, and while most insulators can be made conductive by adding or removing electrons, these materials simply become more insulating.”

MXenes are particularly appealing as a material because they can be reconfigured with other metallic elements to provide a plethora of properties such as tunable conductivity, various forms of magnetism, and/or act as catalysts to accelerate chemical reactions. Furthermore, they are ultra-thin sheets only a few atoms thick, i.e. 2D materials. The newly discovered electrides contain electrons in lattice voids between atoms and ions that can be easily emitted into surrounding space, such as electron sources for large particle accelerators, or borrowed to catalyze a specific chemical reaction.

“We made this discovery to better understand how these materials work,” Bae explained. “If you come across something you don’t understand, look into it further.”