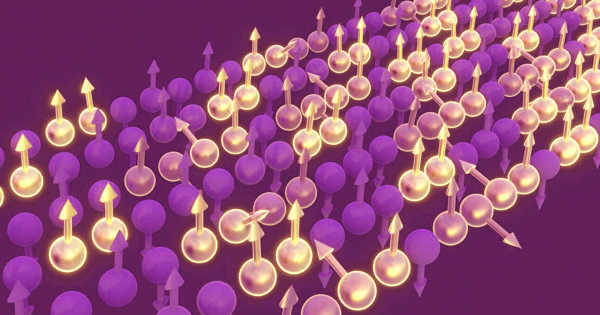 Because of the effects of quantum mechanics, or how matter behaves on the very small scale of atoms and subatomic particles, quantum materials exhibit exotic behaviors. The technologically relevant properties of quantum materials are the result of complex interactions between electron charge, orbital, and spin, as well as their coupling to the crystal structure of the material. For example, in some materials, electrons can flow freely without resistance; this phenomenon, known as superconductivity, could be used to more efficiently transmit power. These properties typically emerge at low temperatures, when crystals have low (broken) structural symmetry.

“Not surprisingly, this low-temperature regime has received a great deal of attention,” said Emil Bozin, a physicist in the X-ray Scattering Group of the Condensed Matter Physics and Materials Science (CMPMS) Division at the U.S. Department of Energy’s (DOE) Brookhaven National Laboratory. “Meanwhile, the high-temperature regime is largely unexplored because it is associated with relatively high symmetry, which is thought to be uninteresting.”

The technologically relevant properties of quantum materials result from complex interactions of electron charge, orbital, and spin and their coupling to the material’s crystal structure.

Bozin and colleagues, on the other hand, have recently discovered states of local symmetry breaking at high temperatures. These local states are associated with electronic orbitals (regions within an atom where electrons are most likely to be found) and act as “precursors” to what happens at low temperatures. When orbitals have the same energy, this is referred to as orbital degeneracy. Lifting this degeneracy means that some orbitals will have higher energy and others will have lower energy.

“We believe that such local states enable the material properties of interest that materialize at much lower temperatures,” explained Bozin.

In 2019, the researchers discovered these local states in a material (copper iridium sulfide) with a metal-insulator transition and an iron-based superconductor. The team, which included researchers from Brookhaven Lab, the Department of Energy’s Oak Ridge National Laboratory, the University of Tennessee, Knoxville, and Columbia University, discovered them in an insulator containing sodium, titanium, silicon, and oxygen. One of the minerals that make up the Earth’s upper mantle is this insulating material. Aside from its geological significance, it is a candidate for quantum spin liquids (QSLs), an exotic state of matter in which electron spins remain fluid-like at low temperatures and fluctuate constantly.

QSLs could provide a material platform for quantum computing, spintronics (electronics based on electron spin rather than charge), superconductivity, and other technologies.

“Our findings suggest that this ODL precursor behavior at high temperature is quite common and should be considered in theoretical studies to understand the functional properties of quantum materials,” said CMPMS Division Condensed Matter Theory Group physicist Weiguo Yin.

The team examined how neutrons and X-rays were scattered by the material to determine its atomic structure. Because of their different atomic weight sensitivities to specific elements, both probes are required. Neutrons, unlike X-rays, can distinguish between light elements such as oxygen. The local arrangement of atoms can be deduced from neutron and X-ray scattering patterns using the atomic pair distribution function (PDF), which describes the distances between different atoms in a sample. Scientists can then use software to find the structural model that best fits the experimental atomic PDF function.

Their analysis revealed local symmetry breaking signatures far above the temperature at which the material undergoes a structural transition to form titanium dimers (two molecules linked together). When the material is heated, these dimers appear to vanish, but they actually remain, evolving into a dual ODL state.

“The high-temperature, high-crystallographic-symmetry state presupposes the presence of orbital degeneracy, but orbital degeneracy may not be energetically favorable,” Bozin explained. “As we can see here, the dimers are replaced, leaving a locally distorted crystal structure. This distortion causes the degeneracy of two orbitals to be lifted, allowing the system to enter a lower-energy state.”

Next, the team intends to tailor the orbital properties of this material, such as by replacing titanium with ruthenium, which will change the electron count and provide a better QSL. They will also investigate whether ODL precursors exist in other materials and how they relate to phenomena of interest such as superconductivity. They are particularly interested in systems with varying degrees of spin-orbit coupling, which is an alternative mechanism for ODL.

“The discovery of these orbital precursors helps us better understand the competition between different low-temperature quantum states—an understanding that will allow us to tilt the playing field to get materials with desired low-temperature properties,” said Simon Billinge, a physicist in the CMPMS Division X-ray Scattering Group and professor of materials science and engineering.