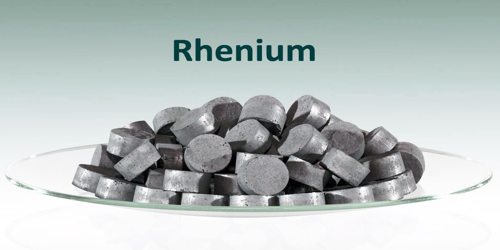 Rhenium was the lower one and indeed it was the last stable, non-radioactive, naturally-occurring element to be discovered. In 1905, Masataka Ogawa found it in the mineral thorianite from Sri Lanka. He realised from lines in its atomic spectrum that it contained an unknown element. He wrongly thought it was the one directly below manganese and so his claim was discounted at the time. However, a re-examination of Ogawa’s original photographic spectra proved he had discovered rhenium.

The isolation of rhenium was finally achieved in May 1925 by Walter Noddack and Ida Tacke working in Berlin. They concentrated it from the ore gadolinite in which it was an impurity.

The metal and its alloys have found limited application as turbine blades in fighter-jet engines, fountain pen points, high-temperature thermocouples (with platinum), catalysts, electrical contact points, and instrument-bearing points and in electrical components, such as in flashbulb filaments as an alloy with tungsten.

Occurrences, Production and Properties of Rhenium

Rhenium is one of the rarest elements in Earth’s crust with an average concentration of 1 ppb; other sources quote the number of 0.5 ppb making it the 77th most abundant element in Earth’s crust. Rhenium does not occur free in nature or as a compound in any distinct mineral; instead it is widely distributed in small amounts in other minerals, usually in concentrations averaging about 0.001 parts per million. Chile is the world leader in rhenium recovery, followed by the United States, Poland, Uzbekistan, and Kazakhstan. Rhenium occurs up to about 20 parts per million in molybdenite and to a lesser extent in sulfidic copper ores. The recovery of rhenium is aided by the concentration of its volatile heptoxide (Re2O7) in the flue dust and gases given off during the smelting of molybdenite ore or from its concentration with the platinum metals in the anode sludge during electrolytic copper refining. The black metal powder is extracted from the gases and dust by leaching or scrubbing them with water to dissolve the oxide, Re2O7, which in turn can be converted to ammonium perrhenate, NH4ReO4, and then reduced to the metal with hydrogen. The powder may be compressed and sintered into bars in hydrogen at elevated temperatures. Cold-working and annealing permit the fabrication of wire or foil.

Commercial rhenium is extracted from molybdenum roaster-flue gas obtained from copper-sulfide ores. Some molybdenum ores contain 0.001% to 0.2% rhenium. Rhenium metal is silvery white and extremely hard; it resists wear and corrosion very well and has one of the highest melting points of the elements. Rhenium is classified as a “Transition Metal” which is located in Groups 3 – 12 of the Periodic Table. Elements classified as Transition Metals are generally described as ductile, malleable, and able to conduct electricity and heat.Nearly 75% of all the elements in the Periodic Table are classified as metals which are detailed in the List of Metals. The melting point of rhenium, 3,180 °C [5,756 °F], is exceeded only by those of tungsten and carbon. Natural rhenium is a mixture of the stable isotope rhenium-185 (37.4 percent) and the radioactive rhenium-187 (62.6 percent, 4.1 × 1010-year half-life).

Rhenium is used as an additive to tungsten- and molybdenum-based alloys to give useful properties. These alloys are used for oven filaments and x-ray machines. It is also used as an electrical contact material as it resists wear and withstands arc corrosion. Rhenium catalysts are extremely resistant to poisoning (deactivation) and are used for the hydrogenation of fine chemicals. Some rhenium is used in nickel alloys to make single-crystal turbine blades.

Related by periodic trends, rhenium has a similar chemistry to that of technetium; work done to label rhenium onto target compounds can often be translated to technetium. This is useful for radiopharmacy, where it is difficult to work with technetium – especially the 99m isotope used in medicine – due to its expense and short half-life.