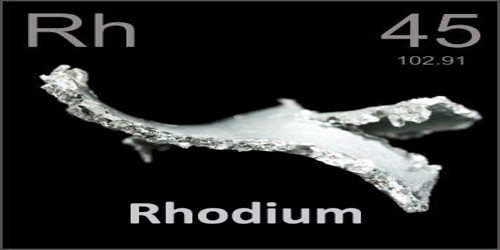 Rhodium (Rh) is a rare, silvery-white metallic element that is hard, durable, and resistant to acids. It is a noble metal and a member of the platinum group. It has only one naturally occurring isotope, 103Rh. Its atomic number 45; atomic weight 102.905; melting point 1,966°C; boiling point 3,727°C; specific gravity 12.41; valence 2, 3, 4, 5, 6. It is one of the rarest and most valuable precious metals. It is used as permanent plating for jewelry and is added to platinum to make high-temperature alloys. Rhodium was discovered in 1803 by William Hyde Wollaston, who isolated it from platinum. He named it after the Greek word rhodon, meaning rose, because of the color of the solution of salts. Wallaston was also the discoverer of palladium. This element is found in platinum or nickel ores together with the other members of the platinum group metals.

The price of rhodium is about six times more than gold by weight. It is never found in mineral form, only being found in trace amounts within platinum or nickel ores. 80% of the world’s supply comes from South Africa, and world production of the metal is only about 20 tons per year.

Occurrences and Properties of Rhodium

Rhodium occurs invariably associated to other platinum metals. The major deposits of rhodium are located in the north of Siberia (Russia), in Ontario (Canada), and in Transval (South Africa). The extracted ores in Canada are rich in nickel and copper sulfide while those extracted in South Africa have volcanic origin, being rich in pyroxene.

Other mineral deposits that contain rhodium, although of smaller commercial importance, result from the erosion of primary deposits and is found in Russia, Colombia and in Alaska. The rhodium abundance in the terrestrial crust is about 0,001 grams per ton. There are 25 known isotopes of this metal in all, most with a half-life of less than an hour. This quantity of isotopes is typical among elements with atomic numbers in this range. Rhodium compounds exist, but not outside of the laboratory. They are highly poisonous.

Rhodium is a fission product of uranium-235; therefore, each kilogram of fission product contains a significant amount of the lighter platinum group metals including rhodium. Used nuclear fuel is a potential source of rhodium. However, the extraction is complex and expensive, and the presence of rhodium radioisotopes requires a period of cooling storage for multiple half-lives of the longest-lived isotope (about 10 years). These factors make the source unattractive and no large-scale extraction has been attempted.

Rhodium has been used for honors, or to symbolize wealth, when more commonly used metals such as silver, gold, or platinum are deemed insufficient. The primary use of this element is in automobiles as a catalytic converter, changing harmful unburned hydrocarbons, carbon monoxide, and nitrogen oxide exhaust emissions into less noxious gases. Of 30,000 kg of rhodium consumed worldwide in 2012, 81% (24,300 kg) went into and 8,060 kg was recovered from this application. About 964 kg of rhodium was used in the glass industry, mostly for production of fiberglass and flat-panel glass, and 2,520 kg was used in the chemical industry. Rhodium finds use in jewelry and for decorations. It is electroplated on white gold and platinum to give it a reflective white surface at time of sale, after which the thin layer wears away with use. This is known as rhodium flashing in the jewelry business. It may also be used in coating sterling silver to protect against tarnish. Solid (pure) rhodium jewelry is very rare, more because of the difficulty of fabrication than because of the high price. The high cost ensures that rhodium is applied only as an electroplate.

Rhodium is a fission product in the decay of the isotope uranium-235, but only about 1% by weight, and most nuclear fuels only contain about 3% uranium-235, meaning only 1% of 3% of nuclear waste consists of this metal. Despite rhodium’s great value, the cost of separating it out is generally greater.