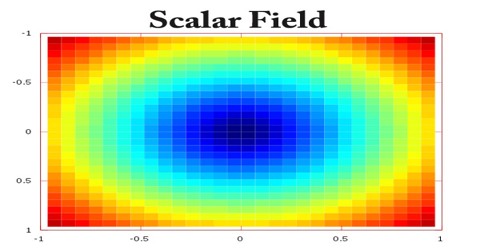 Scalar Field is a function that gives us a single value of some variable for every point in space. A scalar value is a single component that can assume one of a range of values. An example of this is temperature. In contrast, a vector value has more than one component. An example of a vector value is a direction, composed of x, y, and z components. The scalar may either be a mathematical number or a physical quantity.

Scalar Field data being visualized is not continuous, as the original scalar field is, but is composed of a set of discrete sampled values. The sample spacing may be regular, forming a grid, or the sample spacing might be irregular, with varied spacing between samples values. Thus, in ordinary three dimensional spaces the following are examples of scalar fields: sin xyz, cos z, x2 + y2 + z2. A linear field is one of the form ax + by + cz + d for some constants a, b, c and d.

In one dimension, an ordinary function is said to be differentiable at a point, if, when plotted against the variable, it looks like a straight line on a sufficiently small scale around that point.

A field defined in two dimensions is differentiable at the point (x’, y’) if its plot agains x and y looks like a plane on a sufficiently small scale around that point. The same statement is: the field is differentiable at (x’, y’) if it looks like a linear field and is approximated by one as closely as one wants at distances sufficiently close to (x’, y’). In this form differentiability is easy to visualize in any dimension. Scalar Fields are not located in a particular place, they permeate the universe. In a way they represent a smooth background, which may, however couple to other fields in physically interesting ways. To observe them is a challenge.

Scalar Fields are also supposed to cause the accelerated expansion of the universe (inflation), helping to solve the horizon problem and giving a hypothetical reason for the non-vanishing cosmological constant of cosmology. Massless (i.e. long-ranged) scalar fields in this context are known as inflatons. Massive (i.e. short-ranged) scalar fields are proposed, too, using for example Higgs-like fields. In mathematics and physics, a scalar field associates a scalar value to every point in a space. The scalar may either be a mathematical number or a physical quantity. Scalar fields are required to be coordinate-independent, meaning that any two observers using the same units will agree on the value of the scalar field at the same point in space (or spacetime). Examples used in physics include the temperature distribution throughout space, the pressure distribution in a fluid, and spin-zero quantum fields, such as the Higgs field. These fields are the subject of scalar field theory.

In scalar theories of gravitation scalar fields are used to describe the gravitational field.

Scalar-Tensor theories represent the gravitational interaction through both a tensor and a scalar. Such attempts are for example the Jordan theory as a generalization of the Kaluza–Klein theory and the Brans–Dicke theory. Difference between a Scalar Field and a Vector Field