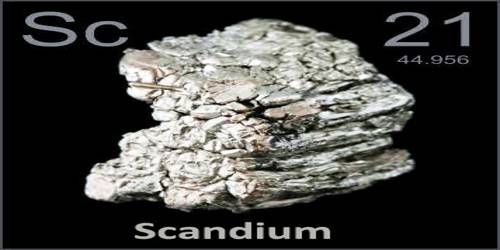 Scandium is a soft, silvery, very lightweight metallic element that is found in various rare minerals and is a byproduct in the processing of certain uranium ores. Its atomic number 21; atomic weight 44.956; melting point 1,540°C; boiling point 2,850°C; specific gravity 2.99; valence 3. Scandium is present in most of the deposits of rare-earth and uranium compounds, but it is extracted from these ores in only a few mines worldwide. It has a high melting point and is used to make high-intensity lights. In 1869, Mendeleev noticed that there was a gap in atomic weights between calcium and titanium and predicted there was an undiscovered element of intermediate atomic weight. He forecast that its oxide would be X2O3. It was discovered as scandium in 1879, by Lars Frederik Nilson of the University of Uppsala, Sweden. He extracted it from euxenite, a complex mineral containing eight metal oxides. He had already extracted erbium oxide from euxenite, and from this oxide he obtained ytterbium oxide and then another oxide of a lighter element whose atomic spectrum showed it to be an unknown metal. This was the metal that Mendeleev had predicted and its oxide was Sc2O3.

The properties of scandium compounds are intermediate between those of aluminium and yttrium. A diagonal relationship exists between the behavior of magnesium and scandium, just as there is between beryllium and aluminium. In the chemical compounds of the elements in group 3, the predominant oxidation state is +3.

Occurrences, Production and Properties of Scandium

Scandium is very widely distributed, and occurs in minute quantities in over 800 mineral species. It is the main component of the very rare and collectable mineral thortveitite, found in Scandinavia. It is only the 50th most common element on Earth (35th most abundant in the crust), but it is the 23rd most common element in the Sun. However, scandium is distributed sparsely and occurs in trace amounts in many minerals. Rare minerals from Scandinavia and Madagascar such as thortveitite, euxenite, and gadolinite are the only known concentrated sources of this element. Scandium can be recovered from thortveitite or extracted as a by-product from uranium mill tailings (sandy waste material). Metallic scandium can be prepared by reducing the fluoride with calcium metal. It can also be prepared by electrolysing molten potassium, lithium and scandium chlorides, using electrodes of tungsten wire and molten zinc.

The world production of scandium is in the order of 10 tonnes per year, in the form of scandium oxide. The demand is about 50% higher, and both the production and demand keep increasing. To produce metallic scandium, the oxide is converted to scandium fluoride and reduced with metallic calcium.

Pure scandium is produced by heating scandium fluoride (ScF3) with Calcium metal. Scandium tarnishes in air and burns easily once it has been ignited. It reacts with water to form Hydrogen gas and will dissolve in many acids. An artificially produced radioactive isotope is used as a tracer in studies of oil wells and pipelines. The Atomic Number of this element is 21 and the Element Symbol is Sc. Its elements can be classified based on their physical states (States of Matter) e.g. gas, solid or liquid. This element is a solid. Scandium is classified as a “Transition Metal” which is located in Groups 3 – 12 of the Periodic Table. Elements classified as Transition Metals are generally described as ductile, malleable, and able to conduct electricity and heat.

Scandium is mainly used for research purposes. It has, however, great potential because it has almost as low a density as aluminium and a much higher melting point. An aluminium-scandium alloy has been used in Russian MIG fighter planes, high-end bicycle frames and baseball bats. The radioactive isotope scandium-46 is used as a tracer in oil refining to monitor the movement of various fractions. It can also be used in underground pipes to detect leaks.

Elemental scandium is considered non-toxic, though extensive animal testing of scandium compounds has not been done. The median lethal dose (LD50) levels for scandium(III) chloride for rats have been determined as 4 mg/kg for intraperitoneal and 755 mg/kg for oral administration. In the light of these results, compounds of scandium should be handled as compounds of moderate toxicity.