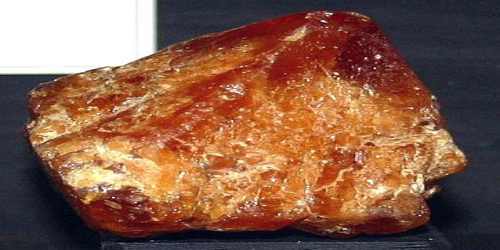 Scheelite is a white, brownish, or greenish mineral, usually fluorescent, consisting of calcium tungstate in tetragonal crystalline form with some tungsten often replaced by molybdenum: occurs principally in contact metamorphic rocks and quartz veins, and is an important source of tungsten and purified calcium tungstate. It has been synthesized using the Czochralski process; the material produced may be used to imitate diamond, as a scintillator, or as a solid-state lasing medium. It is an important ore of tungsten. It acquired commercial value in the 20th century when tungsten became used in alloy steels and electric-light filaments. The mineral is named in honour of the Swedish chemist Carl Wilhelm Scheele, who obtained tungstic acid from it in 1781.

Scheelite was also used in radium paint in the same fashion as was zinc sulphide, and Thomas Edison invented a fluoroscope with a calcium tungstate-coated screen, making the images six times brighter that those with barium platinocyanide; the latter chemical allowed Röntgen to discover X-rays in early November 1895.

Occurrences and Properties of Scheelite

Scheelite commonly occurs as compact or granular masses in contact metasomatic deposits, high-temperature veins, and granite pegmatites. In the United States it has been mined extensively in North Carolina, California, and Nevada. It also occurs in Cornwall and Cumberland in England, and in Bolivia, New South Wales, New Zealand, Siberia, Switzerland, and France. Scheelite is white, yellow, brown, or green in colour and has a vitreous to adamantine lustre. Most scheelite fluoresces, the colour ranging from blue-white or white to yellow, depending upon the amount of molybdenum present. The mineral’s Mohs hardness is 4.5–5; specific gravity, 5.9–6.1; and crystal system, tetragonal. Scheelite is one end-member of a continuous series of solid solutions in which the second component is the similar mineral powellite, CaMoO4.

Scheelite fluoresces under shortwave ultraviolet light, the mineral glows a bright sky-blue. The presence of molybdenum trace impurities occasionally results in a green glow. Fluorescence of scheelite, sometimes associated with native gold, is used by geologists in the search for gold deposits. Today, the main use of tungsten is in the manufacture of cemented carbides. Cemented carbides, or hardmetals as they are often called, are materials made by “cementing” very hard tungsten monocarbide (WC) grains in a binder matrix of tough cobalt metal by liquid phase sintering which results in a hardness close to diamond.