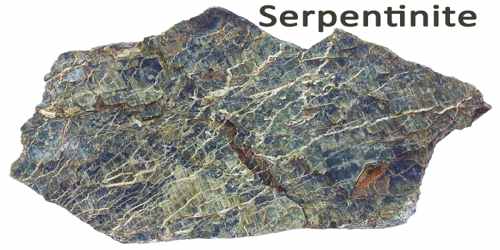 Serpentinite is a metamorphic rock consisting almost entirely of minerals in the serpentine group. Serpentinite forms from the alteration of ferromagnesian silicate materials, such as olivine and pyroxene, during metamorphism. Minerals in this group are formed by serpentinization, a hydration and metamorphic transformation of ultramafic rock from the Earth’s mantle. It is not a single mineral, but rather a group of related minerals. Serpentine group minerals have similar physical properties and form by similar processes. They often occur as fine-grained admixtures and can be difficult to distinguish within a rock. Geologists usually call these materials “serpentine” rather than more specific names to simplify communication.

Occurrences, Formations and Properties of Serpentinite

Serpentine generally occurs in three polymorphs: chrysotile, a fibrous variety used as asbestos; antigorite, a variety occurring in corrugated plates or fibres; and lizardite, a very fine-grained, platy variety. Named in allusion to its resemblance to a snake’s skin, serpentine is usually grayish, white, or green but may be yellow (chrysotile) or green-blue (antigorite); the green colour is due to iron replacing magnesium. Serpentine aggregates include massive, platy, fibrous (forming tough, flexible and elastic fibers), botryoidal, columnar, earthy, platy, micaceous, in pyramidal groupings, in parallel bladed groups, and as fibrous veins. Fibrous veins may be straight, but are more often in curved, angled veins. Some fibrous forms are extremely soft and flexible and resemble wool. Serpentine also pseudomorphs after many minerals, where it form in the same crystal shape as the pseudomorphed mineral.

Serpentine is formed below 500 °C (930 °F) by the addition of water and sometimes silica to various magnesium silicates—e.g., forsterite or enstatite. It characteristically occurs along the crests and axes of great folds, such as island arcs or Alpine mountain chains. Typical occurrences are in altered peridotites, dunites, or pyroxenites; serpentinite is a rock consisting largely of serpentine. Serpentine takes a high polish and is sometimes used as an ornamental stone. Serpentine minerals form where peridotite, dunite, and other ultramafic rocks undergo hydrothermal metamorphism. Ultramafic rocks are rare at Earth’s surface but are abundant at the oceanic Moho, the boundary between the base of the oceanic crust and the upper mantle. It is formed from olivine via several reactions, some of which are complementary. Olivine is a solid solution between the magnesium-endmember forsterite and the iron-endmember fayalite. Soil cover over serpentinite bedrock tends to be thin or absent. Soil with serpentine is poor in calcium and other major plant nutrients, but rich in elements toxic to plants such as chromium and nickel.

The most obvious physical properties of serpentine are its green color, patterned appearance, and slippery feel. These remind the observer of a snake and that is where the name “serpentine” was derived.

Serpentine is also known for its translucent diaphaneity, waxy luster, ease of being cut into shapes, and its ability to accept a polish. These properties make it a popular gemstone, architectural material, and ornamental stone.

Serpentine has been used as an architectural stone for thousands of years. It is available in a wide variety of green and greenish colors, often has an attractive pattern, works easily, and polishes to a nice luster. In the dimension stone trade, serpentine is often sold as “marble.” It might also be described as “serpentine marble” or given a trade name that does not include the word “serpentine.”

The use of chrysotile and other serpentine minerals with an asbestiform habit as insulators has been widespread. They were widely available, effective in their applications and inexpensive to produce. They were used to make wall and ceiling tiles, flooring, shingles, facing material, pipe insulation, stoves, paints, and many other common construction materials and appliances. Attractive serpentine can be cut into a wide variety of gemstones. Gemstone-quality serpentine is easy to polish, and beautiful finishes are possible. Serpentine has some durability concerns. It has a hardness that ranges from 3 to 6 on the Mohs scale. Some specimens of serpentine have a wonderful green color, clarity, and translucence.

Serpentinite has a significant amount of bound water; hence it contains abundant hydrogen atoms able to slow down neutrons by elastic collision (neutron thermalization process). Because of this serpentinite can be used as dry filler inside steel jackets in some designs of nuclear reactors. It can also be added as aggregate to special concrete used in nuclear reactor shielding to increase the concrete density (2.6 g/cm3) and its neutron capture cross section.