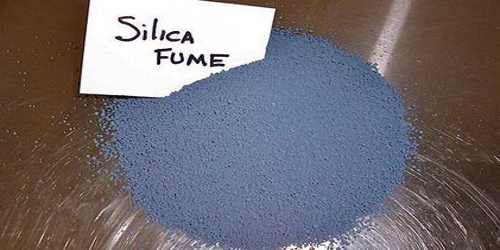 Silica fume is a co-product from the production of silicon or ferrosilicon metal. Silica fume is a mineral admixture, a very fine powder of spherical particles that average 0.1 to 0.3 microns in diameter with a surface area of 17 to 30 m2/g.  Silica fume is used in a variety of cementitious concrete, grouts and mortars, refractory, elastomer and polymer applications. Silica fume powder is gray to off-white in color. It is also known as microsilica, (CAS number 69012-64-2, EINECS number 273-761-1) is an amorphous (non-crystalline) polymorph of silicon dioxide, silica. The first testing of silica fume in Portland-cement-based concretes was carried out in 1952. The biggest drawback to exploring the properties of silica fume was a lack of material with which to experiment. Silica fume on the other hand, is a very fine pozzolanic, amorphous material, a by-product of the production of elemental silicon or ferrosilicon alloys in electric arc furnaces. Before the late 1960s in Europe and the mid-1970s in the United States, silica fumes were simply vented into the atmosphere.

Silica fume is a mineral admixture, composed of submicron particles (100 to 150 times smaller than a grain of cement) of amorphous silicon dioxide.  Silica fume powder is gray to off-white in color, and is available in several product forms and packaging options. It originates from the oxidation of the SiO gas produced during the fabrication of Silicon, Ferrosilicon alloys and CaSi alloys in electric furnaces. The SiO2 formed is then condensed into spherical particles and recovered in bag house filters. Silica fume is a byproduct of producing silicon metal or ferrosilicon alloys. One of the most beneficial uses for silica fume is in concrete. Because of its chemical and physical properties, it is a very reactive pozzolan. Concrete containing silica fume can have very high strength and can be very durable. Silica fume is available from suppliers of concrete admixtures and, when specified, is simply added during concrete production. Placing, finishing, and curing silica-fume concrete require special attention on the part of the concrete contractor.

Silica Fume consists in individual ultrafine particles of silicon dioxide with a high specific surface and an average diameter of 150nm which gives Silica Fume its high pozzolanic properties. Silica fume is used in cementitious applications (concrete, shotcrete, repair products and oil well grouts.), silica fume acts as both a filler and as a “pozzolan” reacting chemically to impart far greater strength and durability to concrete.  It also reduces the permeability of concrete to chloride ions, which protects the reinforcing steel of concrete from corrosion, especially in chloride-rich environments such as coastal regions and those of humid continental roadways and runways (because of the use of deicing salts) and saltwater bridges.