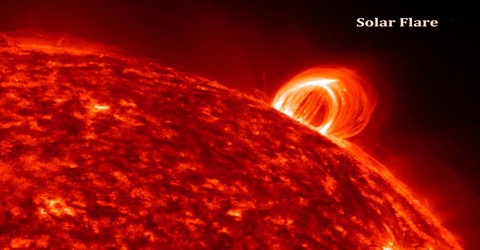 Solar Flare occurs when magnetic energy that has built up in the solar atmosphere is suddenly released. On the Sun’s surface are huge magnetic loops called prominences. When they touch, they short circuit each other, setting off explosions. The amount of energy released is the equivalent of millions of 100-megaton hydrogen bombs exploding at the same time! A solar flare contains high energy photons and particles, and is released from the Sun in a relatively short amount of time. Solar Flare is a tremendous explosion on the Sun that happens when energy stored in ‘twisted’ magnetic fields (usually above sunspots) is suddenly released. Solar flares affect all layers of the solar atmosphere (photosphere, chromosphere, and corona), when the plasma medium is heated to tens of millions kelvins, while the cosmic-ray-like electrons, protons, and heavier ions are accelerated to near the speed of light. They produce radiation across the electromagnetic spectrum at all wavelengths, from radio waves to gamma rays, although most of the energy is spread over frequencies outside the visual range and for this reason the majority of the flares are not visible to the naked eye and must be observed with special instruments.

The largest solar flare ever recorded since satellites started to measure them in 1976 was estimated to be an X28 solar flare which occurred on November 4th, 2003 during Solar Cycle 23. The XRS long channel on the GOES-12 satellite was saturated at X17 for 12 minutes by the intense radiation. A later analysis of the available data yield an estimated peak flux of X28 however there are scientists who think that this solar flare was even stronger than X28. A good thing for us was that the sunspot group which produced this solar flare had already rotated largely of the Earth-facing solar disk when the X28 solar flare occurred. A thing to note is that there has not been a solar flare that saturated the XRS channels on GOES-15 as of March 2017 but it is expected that it will saturate at about the same flux levels. Scientists classify solar flares according to their brightness in the x-ray wavelengths. There are three categories: X-class flares are big; they are major events that can trigger radio blackouts around the whole world and long-lasting radiation storms in the upper atmosphere.

Solar flares are different to ‘coronal mass ejections’ (CMEs), which were once thought to be initiated by solar flares. CMEs are huge bubbles of gas threaded with magnetic field lines that are ejected from the Sun over the course of several hours. Although some are accompanied by flares, it is now known that most CMEs are not associated with flares. There are typically three stages to a solar flare. First is the precursor stage, where the release of magnetic energy is triggered. Soft x-ray emission is detected in this stage. In the second or impulsive stage, protons and electrons are accelerated to energies exceeding 1 MeV. During the impulsive stage, radio waves, hard x-rays, and gamma rays are emitted. The gradual build up and decay of soft x-rays can be detected in the third, decay stage. The duration of these stages can be as short as a few seconds or as long as an hour.

The frequency of flares coincides with the Sun’s eleven year cycle. When the solar cycle is at a minimum, active regions are small and rare and few solar flares are detected. These increase in number as the Sun approaches the maximum part of its cycle.