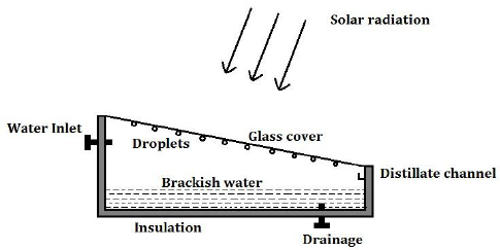 A solar still is a green energy product that uses the natural energy of the sun to purify water. A solar still distills water with substances dissolved in it by using the heat of the Sun to evaporate water so that it may be cooled and collected, thereby purifying it. It can be effectively used to obtain sufficient quantities of good water from saltwater in regions where the insulation of solar energy is high. They are used in areas where drinking water is unavailable, so that clean water is obtained from dirty water or from plants by exposing them to sunlight. It consists essentially of a plastic or glass roof tray to hold water, a galvanized steel gutter for collecting distilled water, and concrete or brick side and end walls.

There are many types of a solar still, including large scale concentrated solar stills and condensation traps (better known as moisture traps amongst survivalists).  The size is dependent on the quantity of water required. In a solar still, impure water is contained outside the collector, where it is evaporated by sunlight shining through clear plastic or glass. The water to be distilled is run down in a slow steady stream at the high end and a small overflow at the low end carries away the remaining salts, preventing crystallization. The pure water vapor condenses on the cool inside surface and drips down, where it is collected and removed.

In solar stills, the solar radiation is reflected and lost to the ambient. Distillation replicates the way nature makes rain. The sun’s energy heats water to the point of evaporation. As the water evaporates, water vapor rises, condensing into the water again as it cools and can then be collected. During the night time, the solar still productivity could be higher owing to the lower ambient temperatures if the heat source is available during this period. This process leaves behind impurities, such as salts and heavy metals, and eliminates microbiological organisms. The end result is pure distilled drinking water. A simple way to increase the heat storage capacity of a solar still is to increase the saline water depth in the still.

Solar stills are used across the world to provide clean, drinkable water to the masses. They are used in cases where rain, piped, or well water is impractical, such as in remote homes or during power outages. The operation of present solar stills is based on evaporation from the free surface of a pool of saltwater and condensation on a tilted cold glass surface. In subtropical hurricane target areas that can lose power for days, solar distillation can provide an alternative source of clean water. The solar-still process uses the sun instead of other sources such as fossil fuels to gain the energy needed for purification.