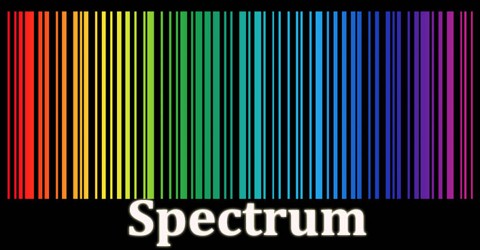 Spectrum is a range over which some measurable property of a physical phenomenon, such as the frequency of sound or electromagnetic radiation, or the mass of specific kinds of particles, can vary. For example, the spectrum of visible light is the range of electromagnetic radiation with frequencies between between 4.7 × 1014 and 7.5 × 1014 hertz.  The word was first used scientifically in optics to describe the rainbow of colors in visible light after passing through a prism. As scientific understanding of light advanced, it came to apply to the entire electromagnetic spectrum. Spectra may be classified according to the nature of their origin, i.e., emission or absorption. An emission spectrum consists of all the radiations emitted by atoms or molecules, whereas in an absorption spectrum, portions of a continuous spectrum are missing because they have been absorbed by the medium through which the light has passed; the missing wavelengths appear as dark lines or gaps.

Nonscientific uses of the term spectrum are sometimes misleading. For instance, a single left–right spectrum of political opinion does not capture the full range of people’s political beliefs. Political scientists use a variety of biaxial and multiaxial systems to more accurately characterize political opinion. In most modern usages of spectrum there is a unifying theme between the extremes at either end. This was not always true in older usage.

The word “spectrum” (Spektrum) was strictly used to designate a ghostly optical afterimage by Goethe in his Theory of Colors and Schopenhauer in On Vision and Colors. The prefix “spectro-” is used to form words relating to spectra. For example, a spectrometer is a device used to record spectra and spectroscopy is the use of a spectrometer for chemical analysis. Spectrum analyzers are instruments that are used to receive and select frequency levels based on the superheterodyne principle. It is very sensitive, converting higher frequencies of up to 10s GHZ into something that is measurable. Received frequencies are first put into a series of pre-selected values.

The term spectrum was expanded to apply to other waves, such as sound waves that could also be measured as a function of frequency, frequency spectrum and power spectrum of a signal. The term now applies to any signal that can be measured or decomposed along a continuous variable such as energy in electron spectroscopy or mass to charge ratio in mass spectrometry. It is also used to refer to a graphical representation of the signal as a function of the dependent variable.

Spectrum analyzers especially the modern ones have a lot of uses. One of which is as a device frequency response measurements, which is used primarily in measuring amplitude response in dBm in comparison to the frequency of the device. The resulting value is on Hertz. An emission line spectrum – If, instead of looking at the spectrum of the Sun we were to look at the spectrum of an object like Messier 42 (the Orion nebula), we would notice a very different kind of spectrum. Rather than being a continuous spectrum, we would see a series of bright lines with a dark background.