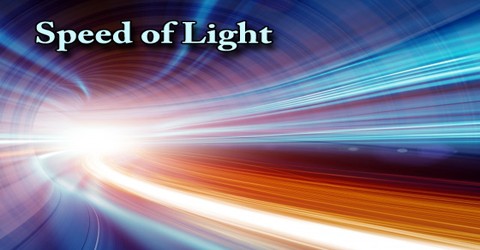 Speed of Light is considered a fundamental constant of nature. Its significance is far broader than its role in describing a property of electromagnetic waves. It serves as the single limiting velocity in the universe, being an upper bound to the propagation speed of signals and to the speeds of all material particles. It is a fundamental physical constant that is the speed at which electromagnetic radiation propagates in a vacuum and that has a value fixed by international convention of 299,792,458 meters per second —symbol c. The speed of light seems, for most everyday purposes, infinite. But the true finiteness of its speed becomes apparent in satellite communications, particularly when geostationary satellites are used. These satellites orbit approximately 36,000 kilometers (km) above the Earth. The propagation delay can be noticed as increased latency when satellite Internet services are used. Electromagnetic waves, including visible light, take approximately 1.3 s to traverse the distance between the Earth and the moon, and about eight minutes (8 min) to get from the sun to the Earth. The EM waves from stars in our galaxy can take up to thousands of years to reach us; the EM waves from the most distant known objects in the Cosmos have spent billions of years on their way to us, where one billion defined as 1,000,000,000 or 10 9.

In our universe, the relatively modest speed of 300,000 kilometres per second, the speed of light, is the de facto maximum speed, and in practice one can never catch up with a beam of light. It was the 16 year old Albert Einstein who first gave serious consideration to why this might be the case, in the final years of the 19th Century. The speed of light had been measured often and very accurately, going back to the Danish astronomer Ole Rømer (or Roemer) who had shown in 1675 that light travels at a finite, although very high speed. Rømer’s observations of the moons of Jupiter yielded a speed of light of about 225,000 km/s, although subsequent, more accurate, experiments have actually shown it to be 299,792,458 metres per second (about 300,000 km/s).

The constant speed of light was to become one of the two main planks of his Special Theory of Relativity, which we will examine in more detail in the next section. The other main plank was the “principle of relativity” (or “principle of invariance”), an idea first stated by the great Italian physicist Galileo Galilei as early as 1632. Galileo argued that the mechanical laws of physics are the same for every inertial observer (those moving uniformly with constant speed in a straight line), and therefore that, purely by observing the outcome of mechanical experiments, one cannot distinguish a state of rest from a state of constant velocity.

The speed of light is of relevance to communications: the one-way and round-trip delay time are greater than zero. This applies from small to astronomical scales. On the other hand, some techniques depend on the finite speed of light, for example in distance measurements. In supercomputers, the speed of light imposes a limit on how quickly data can be sent between processors. If a processor operates at 1 gigahertz, a signal can only travel a maximum of about 30 centimetres (1 ft) in a single cycle. Processors must therefore be placed close to each other to minimize communication latencies; this can cause difficulty with cooling. If clock frequencies continue to increase, the speed of light will eventually become a limiting factor for the internal design of single chips.

Radar systems measure the distance to a target by the time it takes a radio-wave pulse to return to the radar antenna after being reflected by the target: the distance to the target is half the round-trip transit time multiplied by the speed of light. A Global Positioning System (GPS) receiver measures its distance to GPS satellites based on how long it takes for a radio signal to arrive from each satellite, and from these distances calculates the receiver’s position.

Speed of Light has become important in high-frequency trading, where traders seek to gain minute advantages by delivering their trades to exchanges fractions of a second ahead of other traders. For example, traders have been switching to microwave communications between trading hubs, because of the advantage which microwaves travelling at near to the speed of light in air, have over fibre optic signals which travel 30–40% slower at the speed of light through glass.