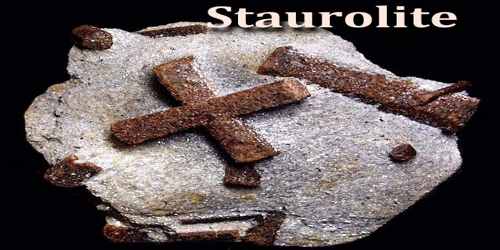 Staurolite is a brownish to black orthorhombic mineral, often having crossed intergrown crystals and found in mica schists and gneisses. Its chemical formula: (FeMg)2Al9Si4O23(OH). Magnesium, zinc and manganese substitute in the iron site and trivalent iron can substitute for aluminium. Staurolite is best known for its distinctive, cross-shaped penetration twins, where two rectangular crystals intersect each other to form a perfect cross. However, its most common twinning habit is in bisecting crystals with a 60° angle that can appear in the shape of an “x” when the crystals are elongated. Although Staurolite does form in single, non-twinned crystals, the twinned habit is much more prevalent.

It is also known as fairy stones, fairy crosses, fairy tears, cross stone, or baseler taufstein, which translates to baptismal stone. This name was given to the stone because of its use in baptisms in the area of Basel, Switzerland. The name staurolite derives from the Greek words stauros and lithos, or cross stone. This name comes from the fact that staurolite naturally occurs in a cross shape. Staurolite can be found in the Blue Ridge Mountains of Virginia, as well as in North Carolina, which is a major source of the gem. It can also be found in various locations around Brazil, England, France, Switzerland, Germany, the former USSR, Scotland, and the Middle East. Staurolite typically occurs in medium-grade schists and gneisses, often in association with garnet, kyanite and mica. Properties and Applications of Staurolite

Staurolite often occurs twinned in a characteristic cross-shape, called cruciform penetration twinning. In handsamples, macroscopically visible staurolite crystals are of prismatic shape. The mineral often forms porphyroblasts. Its crystals range in color from reddish brown to brown, yellow brown, and black with distinct pleochrism. Staurolite rates a 7 to 7.5 on the hardness scale. It has a vitreous to resinous luster, and can be translucent to nearly opaque. It is usually given a step or baguette cut. It also occurs with almandine garnet, micas, kyanite; as well as albite, biotite, and sillimanite in gneiss and schist of regional metamorphic rocks. Staurolite is an aid in discarding destructive habits, stabilizing the emotions, and brings a feeling of protection, safety and security. It is used by some as a tool to psychically communicate with the animal kingdom. This is an excellent stone for use in widening one’s vision and awareness of other realms.

Staurolite is also used by healers to counter the effects of aging, recover from abusive habits, muscle and blood formation, general well being. It has been used in white magic ceremonies, as it was thought to strengthen the power of rituals. Physically, staurolite is used to treat fevers, as well as cellular disorders and growth.