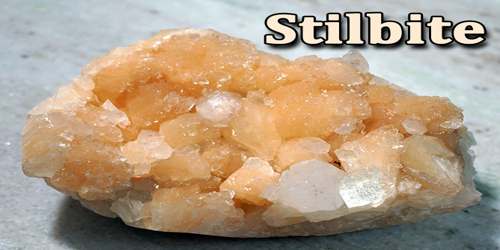 Stilbite is a white or yellow zeolite mineral consisting of hydrated calcium sodium aluminium silicate, often in the form of sheaves of monoclinic crystals. Since its original classification, Stilbite was always regarded as a single mineral species with a slightly variable elemental makeup. It forms in cavities in lava and is often found with Heulandite and Apophyllite. It is found in Poona, India, Iceland, the Faeroe Islands and Scotland. The name Stilbite is derived from the Greek word “stilbein” meaning to shine, because of the pearly lustre of this crystal. In Germany it is referred to as Desmine (“a bundle”) which was the original name given to this stone in 1818 when it was discovered it was a different mineral from Heulandite. It is usually colorless or white, but can also be yellow, brown, pink, salmon, orange, red, green, blue or black.

This soft and delicate crystal resonates with the vibration of Universal Love, helping to open the heart and overcome fear and loss. Its calming influence brings inner peace and in meditation it gently expands our consciousness to be aware of other realms and dimensions. It helps to quiet the mind and sleeping with it by the bed, it is a soothing ally for those suffering insomnia. It is a wonderful support for those who feel overwhelmed with too many tasks or have difficulty making decisions because, by clearing the mind of unconscious clutter, it creates a state of clear, positive thought and helps the mind to focus.

Occurrences, Structure and Properties of Stilbite

Stilbite is a common mineral and found worldwide. Only the most significant deposits will be mentioned here. The largest and most significant finds of Stilbite are from India, in the state of Maharshtra. Several localities there have produced outstanding examples of this mineral, with the cities such as Pune (Poona), Jalgaon, Nasik, Aurangabad, Mumbai, and Ahmadnagar being the most significant. Iceland is a classic producer of Stilbite, and the locality of Teigarhorn, in Berufjördur, is especially noteworthy. The Faroe Islands (Denmark), which are composed of volcanic basalt, are also an important and classic locality. In Sweden, excellent brownish-yellow Stilbite crystal plates come from Malmberget, Lappland.

Its single crystals are tabular and flattened, and usually with pointed termination. However, single individual crystals are very uncommon; crystals will usually be in platy aggregates, or more often in distinct curved aggregates of fan-shaped or wheat sheaf bundles, and in unique “bow tie” formations. Also radiating, globular, in bladed groups, as rounded balls of radiating crystals, and fibrous. Crystals are often doubly terminated, and aggregates may be twinned in interesting bisecting habits.

Stilbite is a series of tectosilicate minerals from the Zeolite group. The most common is Stilbite-Ca, which is a hydrous calcium soldium and aluminium silicate. It is abundant in volcanic rocks and commonly found with Barite, Heulandite, Prehnite, and Apophyllite. The color is usually colorless or white, also yellow, brown, pink, salmon, orange, red, green, blue or black. The luster is generally vitreous, and on the perfect cleavage parallel to the plane of symmetry it is markedly pearly. The streak is white and crystals are transparent to translucent. The hardness is 3½ to 4 and the specific gravity 2.12 to 2.22. Cleavage is perfect on {010}, poor on {001}. The mineral is brittle, with a conchoidal or uneven fracture. It is not radioactive. Large and well-shaped Stilbite crystals are of interest to collectors, especially when in wheat sheaf or bow tie form. Stilbite as a zeolite is also used in water purifiers and chemical filters.