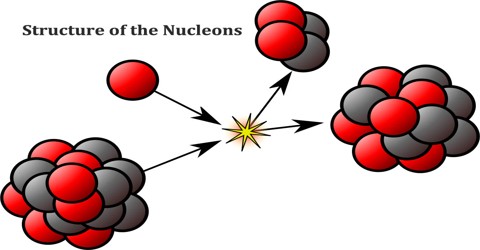 Structure of the Nucleons

Structure of the Nucleons

Hadronic scattering experiments produced extensive and rich data revealing reso- nances and regularities of cross sections. While the quark model provided a firm basis for classifying the particles and resonances, the scattering cross sections were less easily interpreted. The early studies of strong interactions indicated that the couplings of the particles were large. This precluded the straightforward use of perturbation theory. While alternative approaches have yielded some important results, it is still true that even processes as basic as elastic proton–proton scat- tering are beyond our ability to explain in detail. In contradistinction, scattering of electrons by protons and neutrons is open to direct interpretation. The nucleus, the core and center of the atom, is a quantal many-body system governed by the strong interaction. Just as hadrons are composed of quarks and gluons, the nucleus is composed of the most stable of these hadrons—neutrons and protons.

In creating the heaviest nuclei in the laboratory, nuclear physicists are extending the periodic table of the elements and revealing deviations from chemical periodicity. Among the new isotopes they have produced in approaching the limits of nuclear stability are ones whose radioactive decay will provide crucial new tests of fundamental symmetry principles. The liquid drop model is one of the first models of nuclear structure, proposed by Carl Friedrich von Weizsäcker in 1935. It describes the nucleus as a semiclassical fluid made up of neutrons and protons, with an internal repulsive electrostatic force proportional to the number of protons. The quantum mechanical nature of these particles appears via the Pauli exclusion principle, which states that no two nucleons of the same kind can be at the same state.

The expression “shell model” is ambiguous in that it refers to two different eras in the state of the art. It was previously used to describe the existence of nucleon shells in the nucleus according to an approach closer to what is now called mean field theory.

The main idea of the Independent Particle approach is that a nucleon moves inside a certain potential well, which keeps it bound to the nucleus independently from the other nucleons. It is a consequence of strong interactions and binds the nucleons within the nucleus, exhibits the peculiar behaviour of having a finite range: it vanishes when the distance between two nucleons becomes too large; it is attractive at medium range, and repulsive at very small range.

The interacting boson model (IBM) is a model in nuclear physics in which nucleons are represented as pairs, each of them acting as a boson particle, with integral spin of 0, 2 or 4. This makes calculations feasible for larger nuclei. There are several branches of this model – in one of them (IBM-1) one can group all types of nucleons in pairs, in others (for instance – IBM-2) one considers protons and neutrons in pairs separately. Nucleons sit at the boundary where particle physics and nuclear physics overlap. Particle physics, particularly quantum chromodynamics, provides the fundamental equations that explain the properties of quarks and of the strong interaction. These equations explain quantitatively how quarks can bind together into protons and neutrons and all the other hadrons. However, when multiple nucleons are assembled into an atomic nucleus (nuclide), these fundamental equations become too difficult to solve directly. Instead, nuclides are studied within nuclear physics, which studies nucleons and their interactions by approximations and models, such as the nuclear shell model. These models can successfully explain nuclide properties, for example, whether or not a certain nuclide undergoes radioactive decay. Measuring various properties of nuclear forces and tracing their origins to the fundamental interactions between quarts and gluons has been one of the major recent goals of nuclear physics. When two nucleons are separated by subfemtometer distances, their internal quark-gluon structures overlap. In such cases, description in terms of the quark-gluon exchange becomes necessary.

The force between two nucleons has been studied extensively over the years by scattering one nucleon from another, and the data have been used to constrain parameters in models of the force. In the past decade, a few successful parameterizations of the low-energy nucleon-nucleon force have emerged; they offer descriptions that differ in their assumptions about short-range behavior. It is an important challenge to experiment and theory to find ways to better understand this aspect of the nuclear force, where the interface with QCD is the most critical. Such information is provided, for instance, in experiments measuring meson production in nucleon-nucleon collisions.