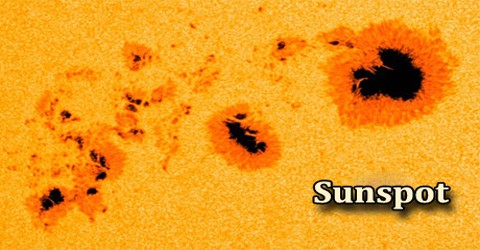 Sunspots are easily recognized as speckles on the surface of the sun. Sunspots appear dark because they are cooler, by up to 1,500°K, than the surrounding photosphere. They are associated with strong magnetic fields and solar magnetic storms moving in a vortex pattern, similar to a tornado on Earth. The number of sunspots waxes and wanes over an 11-year period; at maximum activity there are often increased numbers of solar flares. Individual sunspots may endure anywhere from a few days to a few months, but eventually decay. Sunspots expand and contract as they move across the surface of the Sun with sizes ranging from 16 kilometers (10 mi) to 160,000 kilometers (100,000 mi). Sunspots occur over regions of intense magnetic activity, and when that energy is released, solar flares and big storms called coronal mass ejections erupt from sunspots.

Large sunspots can have diameters of about 50,000 km. Sunspots this large can be seen with the naked eye. Sunspots can number up to 100 in a group, but normally sunspot groups are in the single digits. Sunspots develop and persist for periods ranging from hours to months.

Sunspots come in all sizes and shapes. Some groups of sunspots have a more complex magnetic structure than other sunspot groups and are more likely to produce solar flares. Every single day the sunspots on the Sun are counted and every sunspot group receives a number, a magnetic classification and spot classification by the space weather specialists. The different classifications are:

β – Bèta: A sunspot group that has a positive and a negative polarity (or bipolar) with a simple division between the polarities.

γ – Gamma: A complex region in which the positive and negative polarities are so irregularly distributed that they can’t be classified as a bipolar Sunspot group.

β-γ – Bèta-Gamma: A bipolar sunspot group but complex enough so that no line can be drawn between spots of opposite polarity.

δ – Delta: The umbrae of opposite polarity in a single penumbra.

β-δ – Bèta-Delta: A sunspot group with a general beta magnetic configuration but contains one (or more) delta sunspots.

β-γ-δ – Bèta-Gamma-Delta: A sunspot group with a beta-gamma magnetic configuration but contains one (or more) delta sunspots.

γ-δ – Gamma-Delta: A sunspot group with a gamma magnetic configuration but contains one (or more) delta sunspots. Sunspot populations rise quickly and fall more slowly on an irregular cycle of 11 years. Sunspot number also changes on over long periods. Other solar activity (flares, solar wind variations) follows this cycle between an active Sun and a quiet Sun. Theory suggests that the Sun generates its magnetic field by interior electrical currents in a solar dynamo. The variation caused by the sunspot cycle to solar output is relatively small, on the order of 0.1% of the solar constant, a peak-to-trough range of 1.3 W·m−2 compared with 1366 W·m−2 for the average solar constant. The differential rotation proceeds to wrap the magnetic field around the Sun and large‐scale convection pulls magnetic field lines up and down through the photospheric layer, producing sunspots where compressed field lines move out or into the photospheric layer. The solar cycle is also associated with changes in the coronal structure, which appears round at sunspot maximum, but greatly distorted at sunspot minimum.

Sunspots, in terms of the magnitude of their radiant-energy deficit, have a weak effect on terrestrial climate in a direct sense. On longer time scales, such as the solar cycle, other magnetic phenomena (faculae and the chromospheric network) correlate with sunspot occurrence.