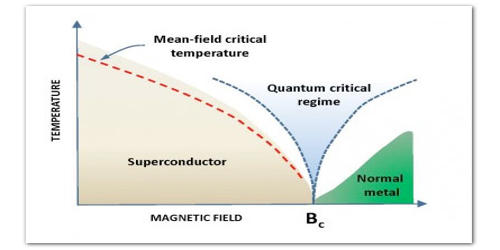 Superconductivity is the ability of certain materials to conduct electric current with practically zero resistance. It is the set of physical properties observed in certain materials, wherein electrical resistance vanishes and from which magnetic flux fields are expelled. It is a phenomenon whereby a charge moves through a material without resistance. This capacity produces interesting and potentially useful effects. Any material exhibiting these properties is a superconductor. For a material to behave as a superconductor, low temperatures are required. Unlike an ordinary metallic conductor, whose resistance decreases gradually as its temperature is lowered even down to near absolute zero, a superconductor has a characteristic critical temperature below which the resistance drops abruptly to zero. An electric current through a loop of superconducting wire can persist indefinitely with no power source. Most superconducting materials only have this useful function at temperatures of just above absolute zero, where atoms barely move.

In theory, this allows electrical energy to be transferred between two points with perfect efficiency, losing nothing to heat. Superconductors have been employed in or proposed for use in, an enormous variety of applications. Examples include high-speed magnetic-levitation trains, magnetic-resonance-imaging (MRI) equipment, ultra-high-speed computer chips, high-capacity digital memory chips, alternative energy storage systems, radio-frequency (RF) filters, radio-frequency amplifiers, and gyroscopes for earth-orbiting satellites. Different superconducting devices are continuing to find more and more applications around the world. There is no doubt that in the future, these applications will become even more widespread.

Superconductivity is a common phenomenon; at low temperatures, many metals, alloys, and compounds are found to show no resistance to the flow of an electric current and to exclude magnetic flux completely. This phenomenon was discovered by Dutch physicist Heike Kamerlingh Onnes on April 8, 1911, in Leiden. His experiment was conducted with elemental mercury at 4 degrees Kelvin (approximately -452 degrees Fahrenheit), the temperature of liquid helium.  This temperature, called the transition temperature, varies for different materials but generally is below 20 K (−253 °C).