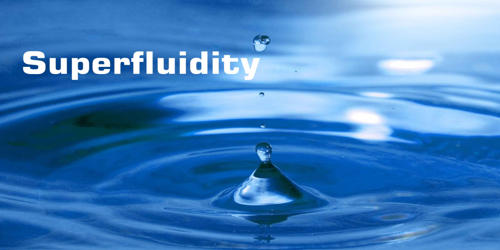 Superfluidity is the characteristic property of a fluid with zero viscosity which therefore flows without any loss of kinetic energy. When stirred, a superfluid forms vortices that continue to rotate indefinitely. Superfluidity occurs in two isotopes of helium (helium-3 and helium-4) when they are liquefied by cooling to cryogenic temperatures. It is also a property of various other exotic states of matter theorized to exist in astrophysics, high-energy physics, and theories of quantum gravity. In fact, it flows so easily that friction does not change the way it flows; it has zero viscosity. Because of this, it can actually flow out of a container, like a bowl, even when the bowl is not tipped so the liquid can spill out.

When cooled to very low temperatures, a superfluid-ready set of bosons, atoms with an even number of nucleons, forms into a Bose-Einstein condensate, a superfluid phase of matter. A superfluidity phase transition occurs when all the constituent atoms of a sample begin to occupy the same quantum state. As such Bose-Einstein condensates are usually superfluids, although one is not equivalent to another. When fermions, atoms with an odd number of nucleons such as the helium-3 isotope, are cooled down to a few Kelvin, this is not sufficient to cause a superfluid transition. In the case of superfluid helium-4, the interactions are stronger than normally one would think of in superfluids. This happens when the atoms are placed very close together and cooled down so much that their quantum wave functions begin to overlap and the atoms lose their individual identities, behaving more like a single super-atom than an agglomeration of atoms.

Today, superfluidity is something that we can directly observe in helium isotopes and in ultra-cold atomic gases. Superfluids can be used in gyroscopes, to help machines predict information about gravity movements that can’t be picked up with regular instruments only. While there are other unique indirect applications of superfluidity, they are most useful in the development of theory and understanding high-temperature superconductivity.