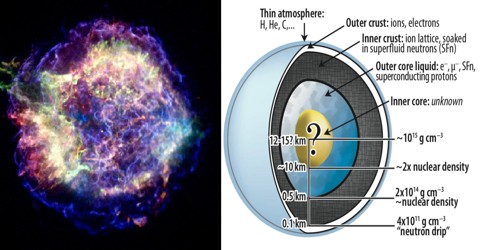 Superfluids: Superfluidity, the frictionless flow and other exotic behaviour observed in liquid helium at temperatures near absolute zero (−273.15 °C, or −459.67 °F), and (less widely used) similar frictionless behaviour of electrons in a superconducting solid. In each case the unusual behaviour arises from quantum mechanical effects. Superfluidity was originally discovered in liquid helium, by Pyotr Kapitsa and John F. Allen. It has since been described through phenomenology and microscopic theories. In liquid helium-4, the superfluidity occurs at far higher temperatures than it does in helium-3. Each atom of helium-4 is a boson particle, by virtue of its integer spin. A helium-3 atom is a fermion particle; it can form bosons only by pairing with itself at much lower temperatures. The discovery of superfluidity in helium-3 was the basis for the award of the 1996 Nobel Prize in Physics. This process is similar to the electron pairing in superconductivity.

Superfluidity allows liquids to flow with zero viscosity, where viscosity is a measure of resistance, analogous to electrical resistance. This allows them to stay completely still even if their container is rotating, flow through pores in their containers, and flow vertically upwards. This occurs because of the siphon effect, which is possible because they still have water tension. Superfluids are formed in two ways:

A superfluid composed of fermions imitates a Bose Einstein condensate in the same way that electrons imitate bosons when the exhibit the effects of superconductivity.

In superfluidity however, the pairs can be formed from neutral atoms or particles, and the interaction is mediated by waves caused by oscillating spin.

Superfluidity can occur at higher temperatures in fluids made of bosons, but the superfluid state is destroyed if the fluid moves over a certain critical velocity. It is also thought to exist inside neutron stars.

Superconductors: Superconductivity, a similar phenomenon, was discovered in 1911 by Dutch physicist Heike Kamerlingh Onnes. When he cooled some mercury down to liquid helium temperatures, it began to conduct electricity with no resistance at all. People began experimenting with other metals, and found that many tranisition metals exhibit this characteristic of 0 resistance if cooled sufficiently. Superconductors are analagous to superfluids in that the charges within them move somewhat like a superfluid – with no resistance through sections of extremely small cross-sectional area. Physicists soon discovered that oxides of copper and other compounds could reach even higher superconducting temperatures. Currently, the highest temperature at wich a material can be superconductive is 138K, and is held by the compound Hg0.8Tl0.2Ba2Ca2Cu3O8.33. In ordinary conductors, electrical resistance lowers as the temperature decreases but it never reaches zero because the electrons collide with each other. Yet an electric current flowing in a loop of mercury wire could potentially maintain a current forever, with no applied voltage – although you would have to provide the energy to keep it cool – and so mercury was dubbed a superconductor.

Many other metals were found to act the same way and, in 1933, German physicists Walther Meissner and Robert Ochsenfeld showed that superconductors also expel magnetic fields. This is known as the Meissner effect. The force of a superconductor’s magnetic field can be stronger than the gravitational force of some objects, allowing them to levitate. In 1957, American physicists John Bardeen, Leon Cooper, and John Robert Schrieffer showed that superconductivity can be explained if, at low enough energies, electrons form a single quantum wave made of pairs of electrons with equal and opposite spins and momentums. These are known as pair condensates, or Cooper pairs.

Cooper pairs are easily broken by thermal energy and so the temperature must be kept low. Bardeen, Cooper, and Schrieffer’s theory showed that materials could not become superconductive over about 30 Kelvin (-243.15 °C).

The critical temperature for superconductivity to occur is much higher in this case because protons interact via the strong nuclear force rather than the electromagnetic force.

Differences between Superconductivity and Superfluidity

A superfluid is a condensate of atoms, and an atom is a local object.  A superconductor is a condensate of Cooper pairs, where the electrons comprising the Cooper pair are generally not right next to each other.  However, an exception is that some materials that have very short superconducting coherence lengths, such that the electrons comprising the Cooper pair are next to each other.

A superfluid is, in it’s simplest description, a condensate of Bosonic atoms, while the Cooper pairs comprising a superconducting condensate are not exactly the same as Bosons because Fermionic antisymmetry (exchanging two electrons flips the sign) needs to be accounted for in the condensate’s many-body wavefunction.  An exception to this is Helium-3, a Fermionic isotope of Helium, which becomes a superfluid (consisting of Cooper pairs of atoms) at very low temperatures.