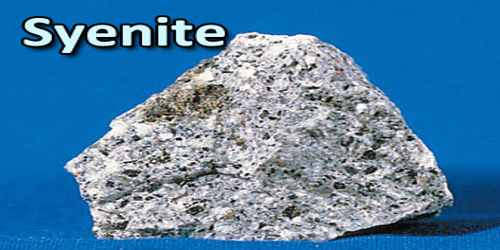 Syenite is a light-colored, coarse-grained igneous rock consisting primarily of alkali feldspar together with some mafic minerals, especially hornblende. Unlike most igneous rocks, syenite has little or no quartz. Some syenites contain larger proportions of mafic components and smaller amounts of felsic material than most granite; those are classed as being of intermediate composition. The volcanic equivalent of syenite is trachyte. It is believed to form from the cooling of magma that forms at very high temperatures and at great depths. It is the coarse-grained equivalent of trachyte. Syenites, which are the plutonic equivalents of trachytes, are found as ring complexes and as discrete intrusions on the stable continental crust and in the cores of some offaxis, ocean-island volcanoes. Most syenites are either peralkaline with high proportions of alkali elements relative to aluminum, or peraluminous with a higher concentration of aluminum relative to alkali and earth-alkali elements (predominantly K, Na, Ca).

Occurrences and Properties of Syenite In the Kola Peninsula of Russia two giant nepheline syenite bodies exists making up the Lovozero Massif and the Khibiny Mountains. These syenites are part of the Kola Alkaline Province. In North America syenite occurs in Arkansas and Montana. Regions in New England have sizable amounts, and in New York syenite gneisses occur. The “great syenite dyke” extends from Hanging Rock, South Carolina through Taxahaw, South Carolina to the Brewer and Edgeworth mine in Chesterfield, South Carolina. In Europe syenite may be found in parts of Switzerland, Germany, Norway, and Portugal, in Plovdiv, Bulgaria and in Ditrău, Romania. In Africa there are syenite formations in Aswan, Egypt, and in Malawi in the Mulanje Mountain Forest Reserve. Syenite rock was used to make the Quay with Sphinxes.

Instead of the usual rock syenite, some of the more important events in New England, Arkansas, Montana, New York (syenite gneisses), Switzerland, Germany, Norway, Plovdiv, Bulgaria, Malawi (Mulanje Mountain Forest Reserve) and Romania (Ditrău). The Malvern Hills, which is on the border between the counties of Herefordshire and Worcestershire United Kingdom, are also formed of syenite.

The texture of syenites, like that of granite, is granular, and these rocks differ from granite only by the absence or scarcity of quartz. The alkali feldspars present may include orthoclase, perthite, albite, or, more rarely, microcline; the ferromagnesian mineral may be biotite, hornblende, or pyroxene. In the alkali syenites, the amphiboles or pyroxenes frequently contain sodium. The accessory constituents include titanite, apatite, zircon, magnetite, and pyrites. Syenites are much less common than granites and diorites. The rocks known as nordmarkite and pulaskite are soda syenites. Rocks transitional between syenites and diorites are known as monzonites. Syenite uses in construction industry include As dimension stone, Cement manufacture, Construction aggregate, For road aggregate, Landscaping, Making natural cement, Manufacture of magnesium and dolomite refractories. Syenite rock is not yet used in the medical industry. Some types of rocks have exceptional properties and can be used in medical industry.