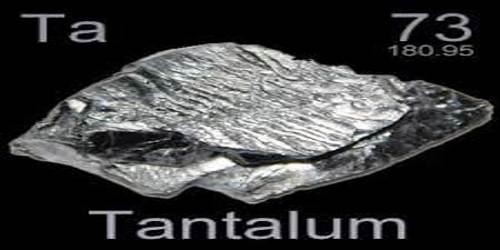 Tantalum is a hard, heavy, gray metallic element that is highly resistant to corrosion at low temperatures. It is almost immune to chemical attack at temperatures below 150o C. Tantalum is virtually resistant to corrosion due to an oxide film on its surface. Its atomic number 73; atomic weight 180.948; melting point 2,996°C; boiling point 5,425°C; specific gravity 16.6; valence 2, 3, 4, 5. It is used to make light-bulb filaments, surgical instruments, and glass for camera lenses. Tantalum was discovered (1802) by the Swedish chemist Anders Gustaf Ekeberg and named after the mythological character Tantalus because of the tantalizing problem of dissolving the oxide in acids. Due to the great chemical similarity of niobium and tantalum, the establishment of the individual identities of the two elements was very difficult. Tantalum was soon identified with niobium, but in 1844 the German chemist Heinrich Rose demonstrated their distinct characters. Although some of the impure metal was isolated earlier, the Russian chemist Werner Bolton prepared (1903) the first ductile tantalum, which was used briefly as incandescent lamp-filament material.

Its Elements can be classified based on their physical states (States of Matter) e.g. gas, solid or liquid. This element is a solid. Tantalum is classified as a “Transition Metal” which are located in Groups 3 – 12 of the Periodic Table. Elements classified as Transition Metals are generally described as ductile, malleable, and able to conduct electricity and heat. Occurrences and Properties of Tantalum

Tantalum is sometimes, but only rarely, found uncombined in nature. It occurs mainly in the mineral columbite-tantalite, which also contains other metals including niobium. It is mined in many places including Australia, Canada and Brazil. There are several complicated steps involved in separating the tantalum from the niobium. A lot of tantalum is obtained commercially as a by-product of tin extraction.

Relatively rare, tantalum is about as abundant as uranium. It occurs, with niobium, in the columbite–tantalite series (in which columbite FeNb2O6 and tantalite FeTa2O6 occur in highly variable ratios) and the pyrochlore–microlite series of minerals. Native tantalum metal with some niobium and traces of manganese and gold occurs sparingly in Russia in placers in the Ural Mountains and possibly the Altai Mountains in Central Asia. Rwanda is the world’s largest extractor of tantalum. Tantalum is closely related to niobium with which they are associated in their ores that are mainly complex oxides, (Nb,Ta)2O5. The mechanical properties of the metal are strongly dependent on its purity, structure, and crystal defects, as is the case with almost all refractory metals. Even low concentrations of interstitial impurities increase the hardness and reduce the ductility. The yield strength is strongly temperature dependent, the value at 200°C being ca. 30% of that at 20°C.

Tantalum is chemically much like niobium because both have similar electronic configurations and because the radius of the tantalum ion is nearly the same as that of niobium as a result of the lanthanoid contraction. Tantalum is usually in the +5 oxidation state in its compounds; lower oxidation states, especially from +2 to +4, have been prepared.

Tantalum compounds are relatively unimportant commercially, although the carbide TaC is used in cemented-carbide tools for machining hard metals. One of the main uses of tantalum is in the production of electronic components. An oxide layer which forms on the surface of tantalum can act as an insulating (dielectric) layer. Because tantalum can be used to coat other metals with a very thin layer, a high capacitance can be achieved in a small volume. This makes tantalum capacitors attractive for portable electronics such as mobile phones. Tantalum causes no immune response in mammals, so has found wide use in the making of surgical implants. It can replace bone, for example in skull plates; as foil or wire it connects torn nerves; and as woven gauze it binds abdominal muscle. It is very resistant to corrosion and so is used in equipment for handling corrosive materials. It has also found uses as electrodes for neon lights, AC/DC rectifiers and in glass for special lenses.

Tantalum alloys can be extremely strong and have been used for turbine blades, rocket nozzles and nose caps for supersonic aircraft.