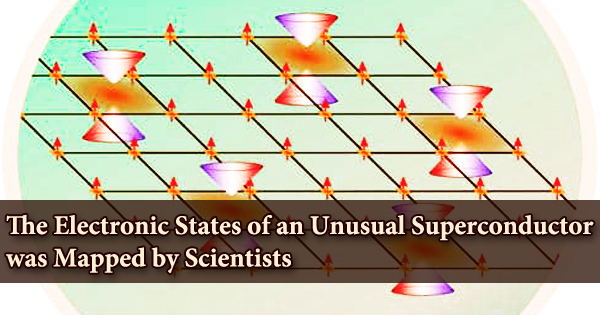 The Electronic States of an Unusual Superconductor was Mapped by Scientists

Scientists studied how local chemical concentrations affect the electronic states of a molecule comprising iron, tellurium, and selenium. They discovered that when the local concentration of iron is sufficiently low, superconductivity (conducting electricity without resistance) appears, along with distinct magnetic correlations; when the concentration of tellurium is sufficiently high, a coexisting electronic state existing only at the surface (topological surface state) appears.

“Quantum computing is still in its infancy, and one of the key challenges is reducing the error rate of the computations,” said first author Yangmu Li, a postdoc in the Neutron Scattering Group of the Condensed Matter Physics and Materials Science (CMPMS) Division at the U.S. Department of Energy’s (DOE) Brookhaven National Laboratory.

“When qubits, or quantum information bits, interact with their surroundings, errors occur. Topological superconducting qubits, on the other hand, are innately shielded from portion of the noise, unlike trapped ions or solid-state qubits like point defects in diamond. As a result, they may be able to enable computing that is less prone to mistakes. The question is, where can we find topological superconductivity?”

The researchers focused their search in this work on a chemical that is known to host topological surface states and belongs to the family of iron-based superconductors. Topological and superconducting states are not evenly distributed throughout the surface of this molecule. Understanding what causes these electrical state fluctuations and how to regulate them is crucial for practical applications like topologically protected quantum computing.

The researchers used spin-polarized neutron scattering to see if the configuration of electrons in the bulk of the material differed between superconducting and nonsuperconducting samples. A one-of-a-kind apparatus for conducting this approach may be found at DOE’s Oak Ridge National Laboratory’s Spallation Neutron Source (SNS).

“Neutron scattering can tell us the magnetic moments, or spins, of electrons and the atomic structure of a material,” explained the corresponding author, Igor Zaliznyak, a physicist in the CMPMS Division Neutron Scattering Group who led the Brookhaven team that helped design and install the instrument with collaborators at Oak Ridge. “We polarize the neutrons using a mirror that reflects just one specific spin direction in order to isolate the magnetic characteristics of electrons.”

The scientists were surprised to find that the two samples had dramatically different patterns of electron magnetic moments. As a result, a change in the quantity of iron produced a change in the electrical state.

“After seeing this dramatic change, we figured we should look at the distribution of electronic states as a function of local chemical composition,” said Zaliznyak.

A sample is blasted with electrons, and the produced x-rays typical of various elements are identified using this approach. They also used microscale electrical sensors to assess local electrical resistance, which shows how well electrons can transfer charge in a coherent manner. Li created a tiny square grid for each crystal (100 by 100 microns). The scientists mapped the local composition and resistance at almost 2,000 distinct sites in total.

“Through the experiments at the CFN, we characterized the chemistry and overall conduction properties of the electrons,” said Zaliznyak. “However, we must also determine the microscopic electrical characteristics of the material, or how electrons propagate through it, whether in the bulk or on the surface. Induced superconductivity in electrons traveling on the surface can host topological objects known as Majorana modes, which are one of the most efficient ways to execute quantum computing in principle. Photoemission spectroscopy can provide information on bulk and surface electrical characteristics.”

Zaliznyak and Li contacted Peter Johnson, the chief of the CMPMS Division Electron Spectroscopy Group, and Nader Zaki, a research associate in Johnson’s group, for the photoemission spectroscopy studies. They measured the intensities of the electronic states propagating on the surface, in the bulk, and creating the superconducting state by measuring the energy and momentum of electrons expelled from the samples (using the same spatial grid) in reaction to light.

They used a model that describes the intensities of these states to quantitatively match the photoemission spectra. Then, the team mapped the electronic state strengths as a function of local composition, essentially building a phase diagram.

“This phase diagram includes the superconducting and topological phase transitions and points to where we could find a useful chemical composition for quantum computation materials,” said Li. “There are no coherent electronic states that can generate topological superconductivity for specific compositions. People previously assumed that the lack of topological superconductivity characteristics was due to instrument failure or measurement mistake. It is due to the electrical states themselves, as demonstrated here.”

“When the material is close to the transition between the topological and nontopological state, you can expect fluctuations,” added Zaliznyak. “The electrical states must be well-developed and coherent for the topology to emerge. As a result, from a technical standpoint, we must manufacture materials that are not near the transition line.”

The researchers will then use the phase diagram to investigate the compositional range in a topological direction, concentrating on samples with less selenium and more tellurium. They’re also thinking about using neutron scattering to figure out why a topological surface state of the same chemical has an unanticipated energy gap (an energy range where no electrons are permitted). Johnson’s team noticed the gap lately and theorized that it was produced by surface magnetism.