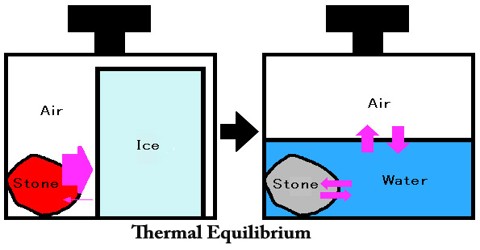 Thermal Equilibrium is when two objects are at the same temperature. Two objects at different temperatures will reach thermal equilibrium because heat energy will flow from high temperature to low temperature. Heat energy flows from high temperature to low. In the summer heat goes from outside where it is 95 to inside. In the winter heat flows from the warm house to the outside. It is possible to force heat to flow the wrong way. This is done by refrigerators and air conditioners, but it requires energy. Work has to be done to make the heat go from cold to hot. People like to compare this to rolling a ball uphill. The ball won’t go uphill by itself, but anyone can make it go uphill by doing work. Air conditioners and heat pumps make heat go “uphill”. Mechanism and Formula of Thermal Equilibrium

Temperature is the average kinetic, or movement, energy of the molecules in a substance. When anyone put two objects of different temperatures in contact with one another, the faster-moving molecules in one material will collide with the slower-moving molecules in the other. The heat energy will gradually spread out until the two objects have the same temperature – until they have reached thermal equilibrium. This is basically the same as the second law of thermodynamics, which states that heat only spontaneously moves from hotter places to colder places, never the other way around. Thermal Equilibrium of a body in itself refers to the body when it is isolated. The background is that no heat enters or leaves it, and that it is allowed unlimited time to settle under its own intrinsic characteristics. When it is completely settled, so that macroscopic change is no longer detectable, it is in its own thermal equilibrium. It is not implied that it is necessarily in other kinds of internal equilibrium.