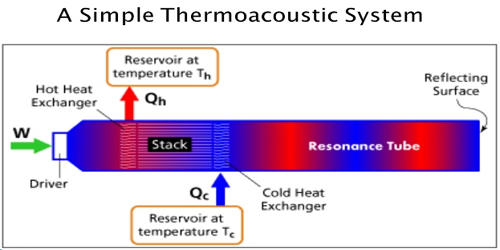 Thermoacoustics is the interaction between temperature, density, and pressure variations of acoustic waves.  It is the study of phenomena influenced by thermodynamics and acoustics. Thermoacoustic heat engines can readily be driven using solar energy or waste heat and they can be controlled using proportional control. These exploit a temperature gradient to produce powerful acoustic pressure waves. The fundamental principles of thermoacoustic phenomena are explained; design challenges and factors influencing efficiency are explored

They can use heat available at low temperatures which makes it ideal for heat recovery and low power applications.  The technology has a key role to play in energy harvesting systems. The components included in thermoacoustic engines are usually very simple compared to conventional engines. Potential applications of thermoacoustics include heat pumps for domestic applications or upgrading industrial waste heat; direct conversion of waste or geothermal heat or solar power into electricity; liquefaction and re-gasification of natural gas; combined heat and power systems, etc. The device can easily be controlled and maintained.

Thermoacoustic effects can be observed when partly molten glass tubes are connected to glass vessels. These processes involve complex multi-physical coupling and transient, highly non-linear relationships which are computationally expensive to model; appropriate numerical modeling techniques and options for analyses are presented. As gas is compressed or expanded minute temperature differences occur. As sound waves travel through small channels oscillating heat is transferred to and from the walls of the channel as well.  Sometimes spontaneously a loud and monotone sound is produced. The combined effects of oscillating heat transfer, pressures, and velocities produce a wide variety of effects that fall under the category of “thermoacoustics.”

The history of thermoacoustics goes back to 1887 when Lord Raleigh published his paper “The Theory of Sound” where thermoacoustic effects were first qualitatively described. A similar effect is observed if a stainless steel tube is with one side at room temperature (293 K) and with the other side in contact with liquid helium at 4.2 K. In this case, spontaneous oscillations are observed which are named “Taconis oscillations”. The mathematical foundation of thermoacoustics is by Nikolaus Rott. Later, the field was inspired by the work of John Wheatley and Swift and his co-workers. The first modern study into thermoacoustics was done by Rott beginning with his work with Taconis oscillations in which he discovered that gas-filled tubes subject to a strong temperature gradient tended to oscillate and “sing.” Technologically thermoacoustic devices have the advantage that they have no moving parts which makes them attractive for applications where reliability is of key importance.