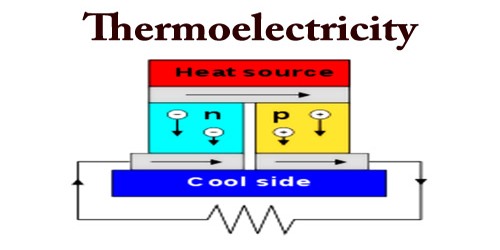 When two metals are placed in electric contact, electrons flow out of the one in which the electrons are less bound and into the other. The binding is measured by the location of the so-called Fermi level of electrons in the metal; the higher the level, the lower is the binding. The Fermi level represents the demarcation in energy within the conduction band of metal between the energy levels occupied by electrons and those that are unoccupied. The energy of an electron at the Fermi level is −W relative to a free electron outside the metal. The flow of electrons between the two conductors in contact continues until the change in electrostatic potential brings the Fermi levels of the two metals (W1 and W2) to the same value. This electrostatic potential is called the contact potential ϕ12 and is given by eϕ12 = W1 − W2, where e is 1.6 × 10−19 coulomb.

Thermoelectricity is a two-way process. It can refer either to the way a temperature difference between one side of a material and the other can produce electricity or to the reverse: the way applying an electric current through a material can create a temperature difference between its two sides, which can be used to heat or cool things without combustion or moving parts.

If a closed circuit is made of two different metals, there will be no net electromotive force in the circuit because the two contact potentials oppose each other and no current will flow. There will be a current if the temperature of one of the junctions is raised with respect to that of the second. There is a net electromotive force generated in the circuit, as it is unlikely that the two metals will have Fermi levels with identical temperature dependence. To maintain the temperature difference, heat must enter the hot junction and leave the cold junction; this is consistent with the fact that the current can be used to do mechanical work. The generation of a thermal electromotive force at a junction is called the Seebeck effect (after the Estonian-born German physicist Thomas Johann Seebeck). The electromotive force is approximately linear with the temperature difference between two junctions of dissimilar metals, which are called a thermocouple. For a thermocouple made of iron and constantan (an alloy of 60 percent copper and 40 percent nickel), the electromotive force is about five millivolts when the cold junction is at 0° C and the hot junction at 100° C. One of the principal applications of the Seebeck effect is the measurement of temperature. The chemical properties of the medium, the temperature of which is measured, and the sensitivity required dictate the choice of components of a thermocouple.

The German physicist Thomas J. Seebeck discovered in the 1820s that if a closed loop is formed by joining the ends of two strips of dissimilar metals and the two junctions of the metals are at different temperatures, an electromotive force, or voltage, arises that is proportional to the temperature difference between the junctions. A circuit of this type is called a thermocouple; a number of thermocouples connected in series is called a thermopile. In 1834 the French physicist Jean C. A. Peltier discovered an effect inverse to the Seebeck effect: If a current passes through a thermocouple, the temperature of one junction increases and the temperature of the other decreases, so that heat is transferred from one junction to the other. The rate of heat transfer is proportional to the current and the direction of transfer is reversed if the current is reversed. The Scottish scientist William Thomson (later Lord Kelvin) discovered in 1854 that if a temperature difference exists between any two points of a current-carrying conductor, heat is either evolved or absorbed depending upon the material. (This heat is not the same as Joule heat, or I2 R heat, which is always evolved.) If heat is absorbed by such a circuit, then heat may be evolved if the direction of the current or of the temperature gradient is reversed. It can be shown that the Seebeck effect is a result of the combined Peltier and Thomson effects. Magnetic fields have been shown to influence all these effects. Many devices based on thermoelectric effects are used to measure temperature, transfer heat, or generate electricity.

Both the Seebeck and Peltier effects also occur at the junction between a metal and a semiconductor and at the junction between two semiconductors. The development of semiconductor thermocouples (e.g., those consisting of n-type and p-type bismuth telluride) has made the use of the Peltier effect practical for refrigeration. Sets of such thermocouples are connected electrically in series and thermally in parallel. When an electric current is made to flow, a temperature difference, which depends on the current, develops between the two junctions. If the temperature of the hotter junction is kept low by removing heat, the second junction can be tens of degrees colder and act as a refrigerator. Peltier refrigerators are used to cool small bodies; they are compact, have no moving mechanical parts, and can be regulated to maintain precise and stable temperatures. They are employed in numerous applications, as, for example, to keep the temperature of a sample constant while it is on a microscope stage.