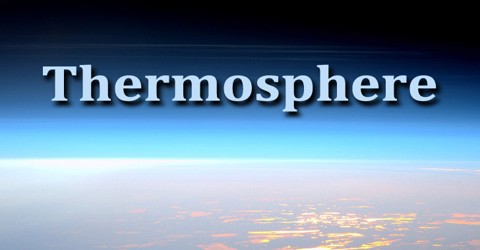 Thermosphere is the region of the Earth’s upper atmosphere lying above the mesosphere and extending from a height of approximately 80 km (50 mi) to between 550 and 700 km (341 and 434 mi) above the Earth’s surface. At these high altitudes, the residual atmospheric gases sort into strata according to molecular mass. The thermosphere is typically about 200° C (360° F) hotter in the daytime than at night, and roughly 500° C (900° F) hotter when the Sun is very active than at other times. Temperatures in the upper thermosphere can range from about 500° C (932° F) to 2,000° C (3,632° F) or higher. Chemical reactions occur much faster here than on the surface of the Earth. The dynamics of the thermosphere are dominated by atmospheric tides, which are driven by the very significant diurnal heating. Atmospheric waves dissipate above this level because of collisions between the neutral gas and the ionospheric plasma.

Layers and Facts about the Thermosphere The thermosphere has extremely high temperatures, coinciding with the prefix in its name, thermo, which means temperature. Temperatures can reach over 3,600 degrees Fahrenheit, and the high heat comes from the intense light rays, or radiation, from the sun. Since there is little to no atmospheric gases above the thermosphere, there is no absorption of the heat from solar radiation, and so temperatures soar. In lower layers of the atmosphere, as you increase in altitude, temperature decreases. The thermosphere is the first layer to which this pattern does not apply.

There is an extremely low concentration of oxygen, and gas particles are very thin and spread out over long distances. Gases that do exist in the thermosphere are mostly ionized, meaning the molecules of gases are gaining or losing charged particles. This happens because there is so much energy in the radiation, such as UV or X-rays, coming from our sun that the gases split apart into charged particles. The thermosphere and exosphere both exhibit this effect and, together, are known as the ionosphere.

The aurora (the Southern and Northern Lights) primarily occurs in the thermosphere. Charged particles (electrons, protons, and other ions) from space collide with atoms and molecules in the thermosphere at high latitudes, exciting them into higher energy states. The solar X-ray and extreme ultraviolet radiation (XUV) at wavelengths < 170 nm is almost completely absorbed within the thermosphere. The solar XUV radiation is highly variable in time and space. In the extreme ultraviolet, the Lyman α line at 121.6 nm represents an important source of ionization and dissociation at ionospheric D layer heights. During quiet periods of solar activity, it alone contains more energy than the rest of the XUV spectrum. Solar wind particles penetrate into the polar regions of the magnetosphere where the geomagnetic field lines are essentially vertically directed. An electric field is generated, directed from dawn to dusk.