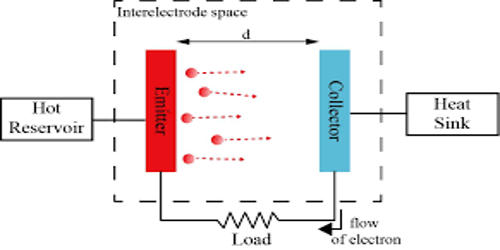 Thermotunnel cooling is a new physical principle for heat engines and heat pumps, based on the tunnel effect and has similarities with a thermocouple. It is similar to thermionic emission cooling in that fast-moving electrons carry heat across a gap but cannot return due to a voltage difference. The estimated potential for cooling efficiency is around 55 % of the Carnot efficiency. The problem with using thermal electrons to carry heat is the fact that, due to the high work function of metals, which are the only practical emitters, the lowest cooling temperate is around 600 °C – clearly not useful except in the most unusual applications. Thus, the process would be slightly more efficient than a heat pump refrigerator. However, prototypes only achieve 5 % efficiency. Thermotunneling was realized using the surface replication method, allowing the preparation of conformal electrodes.

Rather than two different metals or semiconductors, such as to bring into contact with a thermocouple Thermotunneling method uses a vacuum between the materials. The vacuum they are well insulated with respect to the thermal conduction, although they (70 Å ) are only around 7 nm apart.

Thermotunnel cooling avoids this problem by making the gap narrow enough that electrons can tunnel across the gap, carrying the heat with them.  Theoretical analysis shows that the overall tunneling current between the electrodes contains an increased number of high kinetic energy electrons and a reduced number of low energy ones, leading to high efficiency. The problem with this approach has been getting two surfaces near enough that they can tunnel over a large area, yet not touch at any point, which would short the device out preventing it from doing any useful cooling. The particular case of the vacuum gap and solid insulator layer is calculated using digital methods. Efficiency remains high in the wide range of the emitted electric field. The cooling coefficient is found to be as high as 40%-50% in the wide range of the emitted electric field.

At ordinary temperatures at which such elements are to be used, the wavelengths of electromagnetic emissions in the range of a few hundred nanometers to a few micrometers. An effective decoupling of the lattice vibrations takes place only when the gap size is in the range of wavelengths. These sizes, however, a quantum- mechanical tunneling is virtually no longer possible.