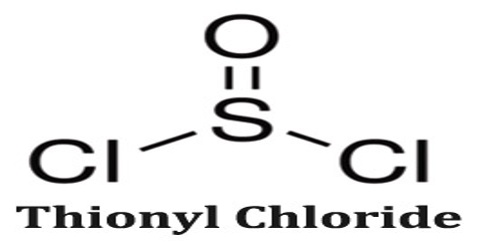 SOCl2 is a reactive compound that can violently and/or explosively release dangerous gases upon contact with water and other reagents. Thionyl chloride is controlled under the Chemical Weapons Convention, where it is listed in Schedule 3. Thionyl chloride is used in the “di-di” method of producing G-series nerve agents.

Production and Properties of Thionyl Chloride

Thionyl chloride has been produced by the reaction of sulphuric acid or sulphur trioxide with sulphur monochloride and chlorine or with sulphur dichloride. The process for the production of thionyl chloride, hydrogen chloride and sulphur dioxide which comprises gradually adding free chlorine and oleum, consisting of anhydrous sulphuric acid having dissolved therein substantially 2.8 mols of sulphur trioxide per mol of sulphuric acid, to a body of reagent of the group consisting of sulphur monochloride, sulphur dichloride and mixtures of the two, with agitation and cooling to maintain the temperature of the reaction mixture at not over 45 C., while venting off the gaseous products, and recovering the thionyl chloride from the resulting liquid reaction mixture. Thionyl chloride has a long shelf life; however “aged” samples develop a yellow hue, possibly due to the formation of disulfur dichloride. It slowly decomposes to S2Cl2, SO2, and Cl2 at just above the boiling point. Thionyl chloride is susceptible to photolysis, which primarily proceeds via a radical mechanism. Samples showing signs of ageing can be purified by distillation under reduced pressure, to give a clear colorless liquid.