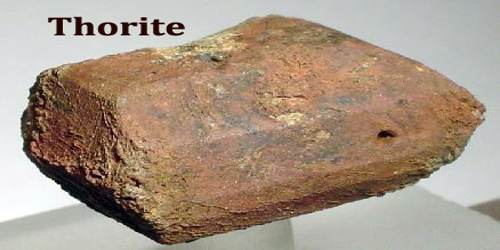 Thorite is a yellow, brownish, or black radioactive mineral consisting of tetragonal thorium silicate. It occurs in coarse granite and is a source of thorium. It is the most common mineral of thorium and is nearly always strongly radioactive. It was named in 1829 to reflect its thorium content. Thorite was discovered in 1828 on the island of Løvøya, Norway, by the vicar and mineralogist, Hans Morten Thrane Esmark, who sent the first specimens of this black mineral to his father, Jens Esmark, who was a professor of mineralogy and geology.

Thorite is the most prevalent mineral containing the radioactive element thorium. However, it is not as important as the primary thorium ore, Monazite, since the extraction process of the ore from Thorite is more difficult then that of Monazite. Specimens of thorite generally come from igneous pegmatites and volcanic extrusive rocks, hydrothermal veins and contact metamorphic rocks.

Production and Properties of Thorite

Thorite, being radioactive, must be stored with all the precautions exercised with radioactive minerals. The radioactivity of Thorite often brings it to a state of metamiction, in which its crystal structure becomes unstable thereby causing the crystal edges to become smooth and rounded. When this happens, the Thorite may gain hydroxyl (OH) molecules in place of the silica (SiO4) molecules and transform into a different mineral, Thorogummite. It is also known to occur as small grains in detrital sands. Crystals are rare, but when found can produce nicely shaped short prismatic crystals with pyramidal terminations. It is commonly associated with zircon, monazite, gadolinite, fergusonite, uraninite, yttrialite and pyrochlore.

Thorite is commonly metamict and hydrated, making it optically isotropic and amorphous. Owing to differences in composition, the specific gravity varies from 4.4 to 6.6 g/cm3. Hardness is 4.5 and the luster is vitreous or resinous. The color is normally black, but also brownish black, orange, yellowish-orange and dark green.

As stubby and prismatic crystals, which are usually terminated. Crystals are rarely as elongated prisms. Most often grainy, reniform, as fibrous masses, and massive. Crystals are usually rounded at the edges due to the metamict nature of Thorite caused by radioactivity. Thorite is currently an important ore of uranium. A variety of thorite, often called “uranothorite”, is particularly rich in uranium and has been a viable uranium ore at Bancroft in Ontario, Canada. Other varieties of thorite include “orangite”, an orange variety, and “calciothorite”, an impure variety with trace amounts of calcium.