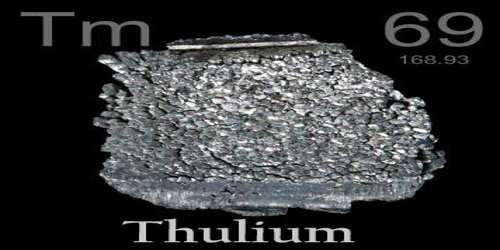 Thulium is a soft, silver-gray metallic element of the lanthanide series with symbol Tm. Its Atomic number 69; atomic weight 168.934; melting point 1,545°C; boiling point 1,727°C; specific gravity 9.3; valence 2, 3. Like the other lanthanides, the most common oxidation state is +3, seen in its oxide, halides and other compounds; because it occurs so late in the series, however, the +2 oxidation state is also stabilized by the nearly full 4f shell that results. One of its artificial radioactive isotopes is used as a radiation source in small, portable x-ray machines. Thulium was first isolated in 1879 as its oxide by Per Teodor Cleve at the University of Uppsala, Sweden. The discoveries of the many rare earth elements (aka lanthanoid) began with yttrium in 1794. This was contaminated with these chemically similar elements. Indeed the early chemists were unaware they were there. In 1843, erbium and terbium were extracted from yttrium, and then, in 1874, Cleve looked more closely at erbium and realised that it must contain yet other elements because he observed that its atomic weight varied slightly depending on the source from which it came. He extracted thulium from it in 1879.

In 1911, the American chemist Theodore William Richards performed 15,000 recrystallisations of thulium bromate in order to obtain an absolutley pure sample of the element and so determine exactly its atomic weight.

Occurrences, Production and Properties of Thulium

Thulium is found principally in the mineral monazite, which contains about 20 parts per million. It is extracted by ion exchange and solvent extraction. The metal is obtained by reducing the anhydrous fluoride with calcium, or reducing the oxide with lanthanum. Its abundance in the Earth crust is 0.5 mg/kg by weight and 50 parts per billion by moles. Thulium makes up approximately 0.5 parts per million of soil, although this value can range from 0.4 to 0.8 parts per million. Thulium makes up 250 parts per quadrillion of seawater. In the solar system, thulium exists in concentrations of 200 parts per trillion by weight and 1 part per trillion by moles. Thulium ore occurs most commonly in China. However, Australia, Brazil, Greenland, India, Tanzania, and the United States also have large reserves of thulium.

Commercial production involves solvent-solvent extraction or ion exchange from monazite. The metal is prepared by reduction of its oxide by lanthanum metal followed by distillation of the thulium metal. Thulium has little practical use beyond research. Thulium-170 is used in small portable X-ray sources suitable for medical X-ray imaging and nondestructive evaluation of thin-walled structures. Together with yttrium, thulium is a component of some high-temperature superconducting oxides. The element is also employed as a dopant in yttrium-aluminum garnet for laser applications. Thulium is considered an inner transition metal as well as a lanthanide metal. On the periodic table, this element is located in one of the two lower rows, where the inner transition elements are found. Thulium is also a lanthanide metal, which is a group of elements with the atomic numbers between 58 to 71. Many lanthanides have magnetic characteristics and tarnish when exposed to air.

There are twenty-five different isotopes of thulium. An isotope is an atom that has a different number of neutrons in the nucleus than compared to a number of protons the element is supposed to have. In a perfect world, thulium would have 69 protons, 69 neutrons, and 69 electrons. With isotopes, the neutrons can be more or fewer than the 69 amount. Neutrons do not have a charge, so they only add weight to the atom.

Thulium has been used in high-temperature superconductors similarly to yttrium. Thulium potentially has use in ferrites, ceramic magnetic materials that are used in microwave equipment. Thulium is also similar to scandium in that it is used in arc lighting for its unusual spectrum, in this case, its green emission lines, which are not covered by other elements. When irradiated in a nuclear reactor, thulium produces an isotope that emits x-rays. A ‘button’ of this isotope is used to make a lightweight, portable x-ray machine for medical use. Thulium is used in lasers with surgical applications.

Thulium-170 is gaining popularity as an X-ray source for cancer treatment via brachytherapy. This isotope has a half-life of 128.6 days and five major emission lines of comparable intensity (at 7.4, 51.354, 52.389, 59.4 and 84.253 keV). Thulium-170 is one of the four most popular radioisotopes for use in industrial radiography.