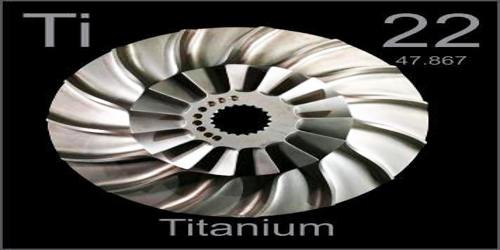 Titanium is a shiny, white metallic element that occurs in all kinds of rocks and soils. It is lightweight, strong, and highly resistant to corrosion. Its Atomic number 22; atomic weight 47.87; melting point 1,660°C; boiling point 3,287°C; specific gravity 4.54; valence 2, 3, 4. Titanium alloys are used especially to make parts for aircraft and ships. The first titanium mineral, a black sand called menachanite, was discovered in 1791 in Cornwall by the Reverend William Gregor. He analysed it and deduced it was made up of the oxides of iron and an unknown metal, and reported it as such to the Royal Geological Society of Cornwall.

In 1795, the German scientist Martin Heinrich Klaproth of Berlin investigated a red ore known as Schörl from Hungary. This is a form of rutile (TiO2) and Klaproth realised it was the oxide of a previously unknown element which he named titanium. When he was told of Gregor’s discovery he investigated menachanite and confirmed it too contained titanium.

Occurrences, Production and Properties of Titanium

Titanium is the ninth most abundant element on Earth. It is almost always present in igneous rocks and the sediments derived from them. It occurs in the minerals ilmenite, rutile and sphene and is present in titanates and many iron ores. Akaogiite is an extremely rare mineral consisting of titanium dioxide. Significant titanium-bearing ilmenite deposits exist in western Australia, Canada, China, India, Mozambique, New Zealand, Norway, Sierra Leone, South Africa, and Ukraine.[16] About 186,000 tonnes of titanium metal sponge were produced in 2011, mostly in China (60,000 t), Japan (56,000 t), Russia (40,000 t), United States (32,000 t) and Kazakhstan (20,700 t). Total reserves of titanium are estimated to exceed 600 million tonnes. Titanium is produced commercially by reducing titanium(IV) chloride with magnesium. Titanium(IV) oxide is produced commercially by either the ‘sulfate process’ or the ‘chloride process’, both of which use the mineral ilmenite as a starting material. The processing of titanium metal occurs in four major steps: reduction of titanium ore into “sponge”, a porous form; melting of sponge, or sponge plus a master alloy to form an ingot; primary fabrication, where an ingot is converted into general mill products such as billet, bar, plate, sheet, strip, and tube; and secondary fabrication of finished shapes from mill products.

Titanium is important as an alloying agent with most metals and some nonmetals. Some of these alloys have much higher tensile strengths than does titanium itself. It is a strong metal with low density that is quite ductile (especially in an oxygen-free environment), lustrous, and metallic-white in color. The relatively high melting point (more than 1,650 °C or 3,000 °F) makes it useful as a refractory metal. It is paramagnetic and has fairly low electrical and thermal conductivity. Titanium is as strong as steel but much less dense. It is therefore important as an alloying agent with many metals including aluminium, molybdenum and iron. These alloys are mainly used in aircraft, spacecraft and missiles because of their low density and ability to withstand extremes of temperature. They are also used in golf clubs, laptops, bicycles and crutches. Titanium metal connects well with bone, so it has found surgical applications such as in joint replacements (especially hip joints) and tooth implants.

The largest use of titanium is in the form of titanium(IV) oxide. It is extensively used as a pigment in house paint, artists’ paint, plastics, enamels and paper. It is a bright white pigment with excellent covering power. It is also a good reflector of infrared radiation and so is used in solar observatories where heat causes poor visibility.