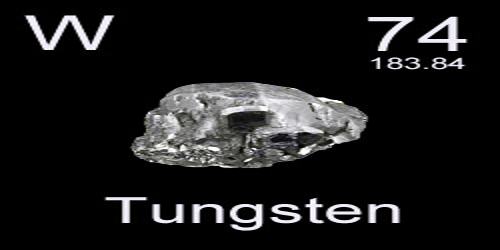 Tungsten is a hard, gray to white metallic element that is very resistant to corrosion. It has the highest melting point of all elements, and it retains its strength at high temperatures. It is also known as wolfram. Tungsten is a rare metal found naturally on Earth almost exclusively in chemical compounds. It was identified as a new element in 1781, and first isolated as a metal in 1783. Its important ores include wolframite and scheelite. Its atomic number 74; atomic weight 183.84; melting point 3,410°C; boiling point 5,900°C; specific gravity 19.3 (20°C); valence 2, 3, 4, 5, 6. This element is a member of the transition metals and sits in the same periodic table column as chromium and molybdenum. In fact, tungsten is the heaviest member of this group and has an atomic mass of 183 grams per mole.  Pure tungsten is a silver-white metal and when made into a fine powder can be combustible and can spontaneously ignite. Natural tungsten contains five stable isotopes and 21 other unstable isotopes.

Tungsten is used in many different ways because it is very strong and durable. It is very resistant to corrosion and has the highest melting point and highest tensile strength of any element. Its strength comes when it is made into compounds, though. Pure tungsten is very soft.

Occurrences and Production of Tungsten

Tungsten originates from the Swedish words ‘tung sten’ meaning heavy stone. It was formerly called Wolfram hence the symbol of the element – ‘W’.  From the name  meaning “wolf soot” was the name given to tungsten  Ancient alchemists called the metal “spuma lupi,” the Latin words for  ‘wolf foam’ which translated to the word “wolframite” in allusion to the objectionable scum or substance formed during the smelting of tin ores containing tungsten. The element naturally occurs in the minerals scheelite, wolframite, huebnertie and ferberite. It is harvested from the minerals by reducing tungsten oxide with hydrogen or carbon.

Once it is sourced, tungsten is often mixed into alloys. The hardest alloys are shaped using diamonds. Diamonds are the only things harder than some tungsten alloys.

Most tungsten resources are found in China, South Korea, Bolivia, Great Britain, Russia and Portugal, as well as in California and Colorado. Though it is found in these many places, 80 percent of world’s supply is controlled by China.

About 61,300 tonnes of tungsten concentrates were produced in the year 2009, and in 2010, world production of tungsten was about 68,000 tonnes. Tungsten is extracted from its ores in several stages. The ore is eventually converted to tungsten(VI) oxide (WO3), which is heated with hydrogen or carbon to produce powdered tungsten. Because of tungsten’s high melting point, it is not commercially feasible to cast tungsten ingots. Instead, powdered tungsten is mixed with small amounts of powdered nickel or other metals, and sintered. During the sintering process, the nickel diffuses into the tungsten, producing an alloy. Properties and Applications of Tungsten

Tungsten is a solid at room temperature and possesses the highest known melting point and lowest vapor pressure of any metals. It also has the highest tensile strength known. Tungsten is classified as a “Transition Metal” which is located in Groups 3 – 12 of the Periodic Table. Elements classified as Transition Metals are generally described as ductile, malleable, and able to conduct electricity and heat.Nearly 75% of all the elements in the Periodic Table are classified as metals which are detailed in the List of Metals.

It is quite ductile and can be readily drawn into a wire. However, it’s much more easily pressed out than most other metals. Due to its high class properties, tungsten is able to be used in a host of real-world applications. Tungsten is generally not a household name, so few people might realize that there are a host of applications for this useful element. For instance, due to its extremely high melting point and ductilibility, tungsten is very readily employed in incandescent and fluorescent light bulb filaments. Some jewelers also use tungsten carbide to make wedding bands and other rings.

Another tungsten compound that is particularly useful is tungsten disulfide. It is used as a dry lubricant in temperatures as high as 932 degrees Fahrenheit (500 degrees Celsius).

Some other uses of tungsten include metal evaporation work, the manufacturing of paints, making glass-to-metal seals and creating electron and television tubes. The military uses tungsten to make bullets and missiles used in “kinetic bombardment.” This type of attack uses a super dense material to breach armor instead of explosives.

Biologically, some bacteria use tungsten to reduce carboxylic acids to aldehydes.