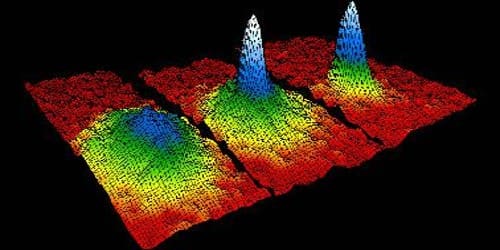 Ultracold atoms are atoms that are maintained at temperatures close to 0 kelvin (absolute zero), typically below several tens of microkelvin (µK). At these temperatures the atom’s quantum-mechanical properties become important. In the quest to reach colder and colder temperatures, physicists in 1995 created a remarkable new form of matter—neither gas, nor liquid, nor solid—called a Bose-Einstein condensate (BEC). A Bose-Einstein condensate (BEC) is a collection of bosonic particles where a macroscopic number of them are occupying a definite single-particle quantum state.

Studies on an energy-dependent scattering of ultracold atoms were previously carried out near zero collision energies. To reach such low temperatures, a combination of several techniques typically has to be used. First, atoms are usually trapped and pre-cooled via laser cooling in a magneto-optical trap. It also confirms that ultracold atoms are a powerful testbed in which to study highly non-trivial quantum phenomena. To reach the lowest possible temperature, further cooling is performed using evaporative cooling in a magnetic or optical trap. Several Nobel prizes in physics are related to the development of the techniques to manipulate quantum properties of individual atoms (e.g. 1995-1997, 2001, 2005, 2012, 2017).

Experiments with ultracold atoms study a variety of phenomena, including quantum phase transitions, Bose-Einstein condensation (BEC), bosonic superfluidity, quantum magnetism, many-body spin dynamics, Efimov states, Bardeen-Cooper-Schrieffer (BCS) superfluidity, and the BEC-BCS crossover. Atomic physicists have verified a key prediction from a 55-year-old theory about one-dimensional electronics that is increasingly relevant because of the quest for smaller and smaller devices. Some of these research directions utilize ultracold atom systems as quantum simulators to study the physics of other systems, including the unitary Fermi gas and the Ising and Hubbard models.