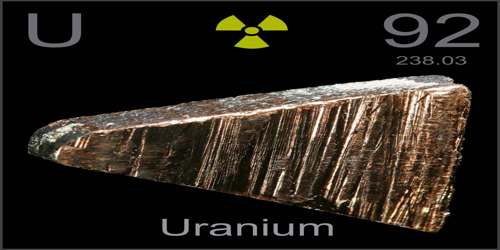 Uranium is a heavy, silvery-white, highly toxic, radioactive metallic element of the actinide series. It has 14 known isotopes, of which U 238 is the most naturally abundant, occurring in several minerals. A uranium atom has 92 protons and 92 electrons, of which 6 are valence electrons. Uranium is weakly radioactive because all isotopes of uranium are unstable, with half-lives varying between 159,200 years and 4.5 billion years. Uranium is naturally radioactive, which means that atoms of uranium are unstable and decay by emitting particles and energy. Uranium decays very slowly by emitting an alpha particle. For many years, uranium was used primarily as a colorant in ceramic glazes, producing colors that ranged from orange-red to lemon yellow. It was also used for tinting in early photography.

Occurrences and Properties of Uranium

Uranium was found to be radioactive in 1896 by Antoine H. Becquerel, a French physicist. Becquerel had left a sample of uranium on top of an unexposed photographic plate, which became cloudy. Uranium naturally contains all three isotopes (U-238, U-235 and U-234). Uranium is a naturally occurring element that can be found in low levels within all rock, soil, and water. Uranium is the 51st element in order of abundance in the Earth’s crust. Uranium is also the highest-numbered element to be found naturally in significant quantities on Earth and is almost always found combined with other elements. The decay of uranium, thorium, and potassium-40 in the Earth’s mantle is thought to be the main source of heat that keeps the outer core liquid and drives mantle convection, which in turn drives plate tectonics. Uranium is a silvery, shiny metal that is both ductile and malleable. Ductile means capable of being drawn into thin wires. Malleable means capable of being hammered into thin sheets. Its melting point is 1,132.3°C (2,070.1°F) and its boiling point is about 3,818°C (6,904°F). Its density is about 19.05 grams per cubic centimeter. It is a relatively reactive element. It combines with nonmetals such as oxygen, sulfur, chlorine, fluorine, phosphorus, and bromine. It also dissolves in acids and reacts with water. It forms many compounds that tend to have yellowish or greenish colors.

Uranium compounds have been used to color glass and ceramics for centuries. Scientists have found that glass made in Italy as early as A.D. 79 was colored with uranium oxide. They have been able to prove that the coloring was done intentionally.