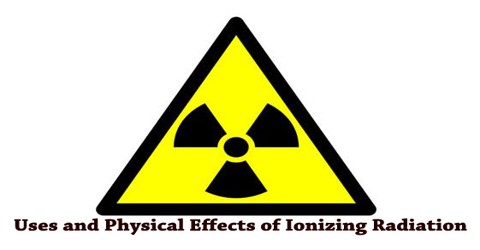 Atoms consist of comparatively large particles (protons and neutrons) sitting in a central nucleus, orbited by smaller particles (electrons): a miniature solar system. Normally, the number of protons in the center of the atom equals the number of electrons in orbit. An ion is any atom or molecule that does not have the normal number of electrons. Ionizing radiation is any form of radiation that has enough energy to knock electrons out of atoms or molecules, creating ions.

Ionizing Radiation is any type of particle or electromagnetic wave that carries enough energy to ionize or remove electrons from an atom. There are two types of electromagnetic waves that can ionize atoms: X-rays and gamma-rays, and sometimes they have the same energy. Gamma radiation is produced by interactions within the nucleus, while X-rays are produced outside of the nucleus by electrons. Ionizing Radiation has many industrial, military, and medical uses. Its usefulness must be balanced with its hazards, a compromise that has shifted over time.

The uses of ionizing radiation in medicine are currently undergoing changes due to at least four major influences: (1) the constantly changing public perception of the hazards of radiation, (2) continuing technical innovation and development in equipment, (3) the imposition of diagnosis-related group funding by government health-care funding agencies, and (4) an increase in the average age of the population. The combined effect of these influences will probably result in a major increase in biplanar fluoroscopic examinations to support nonsurgical approaches such as percutaneous transluminal coronary angioplasty, percutaneous transluminal neuroembolism, and lithotripsy the fracturing of kidney stones.

In addition, improved diagnostic techniques, such as using positron emission tomography, a combination of biochemistry and positron-emitting isotopes, can be expected to increase the number of small cyclotrons installed in medical centers. The industrial uses of ionizing radiation include a broad spectrum of applications that continue to increase both in kind and in number. By far the most commonplace are those involving the use of specific radionuclides, more commonly known as radioisotopes, as tracers or as sources of ionizing radiation. Neutron radiation is essential to the working of nuclear reactors and nuclear weapons.

Other applications include the use of the heat from decaying radioisotopes to generate electricity and, most important, the use of nuclear energy as a competitor of fossil fuels for the generation of electrical energy. Electrical Effects: Ionization of materials temporarily increases their conductivity, potentially permitting damaging current levels. This is a particular hazard in semiconductor microelectronics employed in electronic equipment, with subsequent currents introducing operation errors or even permanently damaging the devices. Devices intended for high radiation environments such as the nuclear industry and extra atmospheric (space) applications may be made radiation hard to resist such effects through design, material selection, and fabrication methods. The electrical effects of ionizing radiation are exploited in gas-filled radiation detectors, e.g. the Geiger-Muller counter or the ion chamber.

Chemical Effects: Ionization of molecules can lead to radiolysis (breaking chemical bonds), and formation of highly reactive free radicals. These free radicals may then react chemically with neighbouring materials even after the original radiation has stopped. It can disrupt crystal lattices in metals, causing them to become amorphous, with consequent swelling, material creep, and embrittlement. Ionizing radiation can also accelerate existing chemical reactions such as polymerization and corrosion, by contributing to the activation energy required for the reaction. Optical materials darken under the effect of ionizing radiation.

High-intensity ionizing radiation in air can produce a visible ionized air glow of telltale bluish-purplish color. The glow can be observed, e.g., during criticality accidents, around mushroom clouds shortly after a nuclear explosion, or inside of a damaged nuclear reactor like during the Chernobyl disaster. Nuclear Effects: Neutron radiation, alpha radiation, and extremely energetic gamma (> ~20 MeV) can cause nuclear transmutation and induced radioactivity. The relevant mechanisms are neutron activation, alpha absorption, and photodisintegration. A large enough number of transmutations can change macroscopic properties and cause targets to become radioactive themselves, even after the original source is removed.