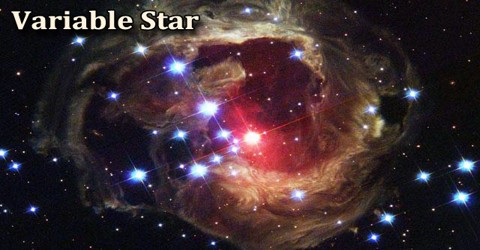 Variable Star is a star whose actual or observed brightness varies periodically. These changes can occur with varying degrees of regularity and intensity, over times ranging from a fraction of a second to many years. Intrinsic variation occurs because of changes of the star itself, often due to internal vibration or eruptions, or to influx of nearby material. Cepheids and novae are examples of intrinsically variable stars. Extrinsic variation in a star’s observed brightness that does not reflect physical changes in the star also occur, as when a darker star periodically eclipses a brighter star in an eclipsing binary system, or with the rotation of a star. The first modern identified variable star was Omicron Ceti, later renamed Mira. It had been described as a nova in 1596 by David Fabricius. In 1638, Johannes Holwards observed Omicron Cetipulsating in a regular 11-month cycle. This was an important discovery, as it helped verify that the stars were not eternal and invariable as ancient philosophers such as Aristotle had believed. The discovery of variable stars, along with reports of supernovae, paved the way for development of the science of astronomy. Cepheid Variables are very luminous stars, 500 to 300,000 times greater than the sun, with short periods of change that range from 1 to 100 days. They are pulsating variables that expand and shrink dramatically within a short period of time, following a specific pattern. Astronomers can make distance measurements to a Cepheid by measuring the variability of its luminosity, which makes them very valuable to the science.

Cataclysmic Variables, also called Explosive Variables brighten because of sharp or violent outbursts caused by thermonuclear processes either on the surface or deep inside. These include binary type stars, with two close stars having a mutual effect on mass. Supernovae, Novae, Recurrent Novae and Dwarf Novae are a group of stars that have dramatic or sudden magnitude increases, usually because of a stellar explosion.

Rotating Stars are variable stars that show small light changes caused by patches of light spots on their surfaces. They may have bright spots at the magnetic poles. Rotating stars are often binary systems and can be non-spherical or ellipsoidal in shape, which causes brightness changes as they move. Variable stars are generally analysed using photometry, spectrophotometry and spectroscopy. Measurements of their changes in brightness can be plotted to produce light curves. For regular variables, the period of variation and its amplitude can be very well established; for many variable stars, though, these quantities may vary slowly over time, or even from one period to the next. Peak brightnesses in the light curve are known as maxima, while troughs are known as minima.

Within the different categories of variables, some are particularly valuable to astronomy, since their variability can be measured. Research into the Cepheid variables helps determine the age of the universe and has provided information on the distant galaxies. Studies of Mira variables are important to our understanding of our Sun. Supernovae give us insight into how the universe is expanding, while Cataclysmic variables help in understanding active galaxies and supermassive black holes. Variable stars are a specific field of study in astronomy, providing important information on how and why things change over time. They play a significant role in our understanding of the universe.