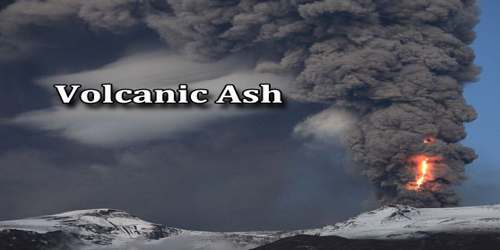 Volcanic ash is a combination of fine particles made of rock, tiny strands of supercooled lava called volcanic glass, and minerals. It is created when solid rock shatters and magma separates into minute particles during explosive volcanic activity. Volcanic ash consists of powder-size to sand-size particles of igneous rock material that have been blown into the air by an erupting volcano.  The particles are usually smaller than an inch in diameter, but can contain powdered rocks from the volcano’s exterior shattered during an eruption. Volcanic ash is formed during explosive volcanic eruptions when dissolved gases in magma expand and escape violently into the atmosphere. The force of the escaping gas shatters the magma and propels it into the atmosphere where it solidifies into fragments of volcanic rock and glass. Ash is also produced when magma comes into contact with water during phreatomagmatic eruptions, causing the water to explosively flash to steam leading to shattering of magma. Once in the air, ash is transported by wind up to thousands of kilometers away. Formation and Properties of Volcanic Ash

Volcanic ash is made of tiny fragments of jagged rock, minerals, and volcanic glass. Unlike the soft ash created by burning wood, volcanic ash is hard, abrasive, and does not dissolve in water. Generally, particles of volcanic ash are 2 millimeters (.08 inches) across or smaller. It is formed during explosive volcanic eruptions, phreatomagmatic eruptions and during transport in pyroclastic density currents.

Physical and chemical characteristics of volcanic ash are primarily controlled by the style of volcanic eruption. Volcanoes display a range of eruption styles which are controlled by magma chemistry, crystal content, temperature and dissolved gases of the erupting magma and can be classified using the volcanic explosivity index (VEI). Effusive eruptions (VEI 1) of basaltic composition produce <105 m3 of ejecta, whereas extremely explosive eruptions (VEI 5+) of rhyolitic and dacitic composition can inject large quantities (>109 m3) of ejecta into the atmosphere. At first glance, volcanic ash looks like a soft, harmless powder. Instead, volcanic ash is a rock material with a hardness of about 5+ on the Mohs Hardness Scale. It is composed of irregularly-shaped particles with sharp, jagged edge.

Volcanic ash particles are very small in size and have a vesicular structure with numerous cavities. This gives them a relatively low density for a rock material. This low density, combined with the very small particle size, allows volcanic ash to be carried high into the atmosphere by an eruption and carried long distances by the wind. Volcanic ash can be a serious side effect of volcanic eruptions. Ash clouds rain down on surrounding areas, sometimes coating the earth in feet of ash. Areas close to the volcano have been recorded as having 5-7 feet of ash coating the surface! Wind can carry fine particles of ash away from the eruption site, extending the damage to surrounding communities. It can also cause thunder and lightening storms, and if it is carried high enough into the atmosphere it can deflect light from the Sun, cooling temperatures on earth and creating a volcanic winter.