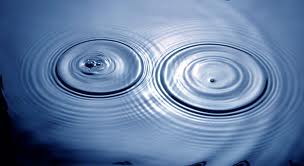 Wave is a form of disturbance which travels onward due to repeated periodic motion of the medium particles. Energy is transferred during wave motion.

Radiant energy like visible light, x-ray, infrared ray, micro wave etc. are simultaneous oscillations of electric and magnetic field. This type of wave can propagate without any material medium.

In longitudinal waves the particles vibrate in the direction of wave propagation.

The number of complete oscillations made in one second is called the frequency. The S.I. unit of frequency is Hertz (Hz).

Time taken by a particle to make one complete oscillation is called the time period.

The distance traveled by a wave during the time in which a particle makes one complete oscillation is called the wavelength.

The distance moved by a wave per second is called its velocity. A ray is the direction or the path taken by light. Ordinarily it refers to a narrow stream of light energy. In diagrams rays are represented by lines with arrows on them.

A beam is a stream of light energy and may be represented by a number of light rays which may be converging or diverging.