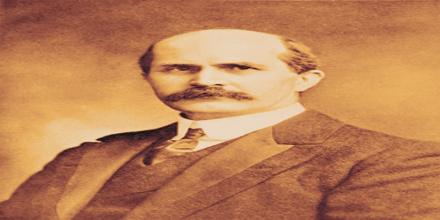 William Henry Bragg, Physicist, chemist, mathematician and active sportsman was born July 2, 1862, Wigton, Cumberland, England. He was educated at the Old Grammar School there, at King William’s College on the Isle of Man and, having won an exhibition (scholarship), at Trinity College, Cambridge. He graduated in 1884 as third wrangler, and in 1885 was awarded a first class honours in the mathematical tripos. In 1885, at the age of 23, Bragg was appointed (Sir Thomas) Elder Professor of Mathematics and Experimental Physics in the University of Adelaide, and started work there early in 1886. He was a joint winner (with his son Sir Lawrence Bragg) of the Nobel Prize for Physics in 1915 for his research on the determination of crystal structures. He was knighted in 1920.