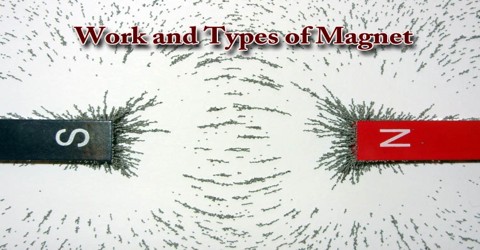 Work and Types of Magnet

Work and Types of Magnet

Magnet is a material or object that produces a magnetic field. This magnetic field is invisible but is responsible for the most notable property of a magnet: a force that pulls on other ferromagnetic materials, such as iron, and attracts or repels other magnets.

A permanent magnet is an object made from a material that is magnetized and creates its own persistent magnetic field. But that’s not the only kind of motion that’s happening. There’s something called quantum mechanical spin. Atoms in which both of these things don’t cancel out act like tiny magnets. And these magnets can combine together to make a material magnetic. They can combine together, but not always. Unfortunately it’s a little more complicated than that. Just because the electrons in a material are producing magnetic fields doesn’t mean the material will be a magnet. There are a couple of other things that have to be the case for that to happen. For one thing, these tiny magnets could very easily all point in lots of different directions and could cancel each other out. In some materials, for the sake of stability, the atoms pull on each other until they line up in nice, straight rows. These are called ferromagnetic materials.

Over a long period of time, the earth’s magnetic field can align the domains in a material like iron and produce a fairly weak magnet. This is why we can find rocks on the ground with magnetic properties. But generally, we create proper magnets by putting iron inside our own magnetic fields created using electromagnets. It’s kind of like charging the iron – forcing the domains to align. Once you’ve lined up the domains, the external magnetic field is no longer needed, and they will stay aligned for a long time. These are the most common type of magnets that we know and interact with in our daily lives, e.g.; the magnets on our refrigerators. These magnets are permanent in the sense that once they have been magnetized they retain a certain degree of magnetism. Permanent magnets are generally made of ferromagnetic material. Such material consists of atoms and molecules that each have a magnetic field and are positioned to reinforce each other. Permanent Magnets can further be classified into four types based on their composition:

Permanent Magnets can also be classified into Injection Moulded and Flexible magnets. Injection molded magnets are a composite of various types of resin and magnetic powders, allowing parts of complex shapes to be manufactured by injection molding. Flexible magnets are similar to injection molded magnets, using a flexible resin or binder such as vinyl, and produced in flat strips or sheets. These magnets are lower in magnetic strength but can be very flexible, depending on the binder used. It can be made into any shape imaginable. They can be made into round bars, rectangles, horseshoes, donuts, rings, disks and other custom shapes. Electromagnets are extremely strong magnets. They are produced by placing a metal core (usually an iron alloy) inside a coil of wire carrying an electric current. The electricity in the current produces a magnetic field. The strength of the magnet is directly proportional to the strength of the current and the number of coils of wire. Its polarity depends on the direction of flow of current. While the current flows, the core behaves like a magnet. However, as soon as the current stops, the core is demagnetized.

Electromagnets are most useful when a magnet must be switched on and off as in large cranes used to lift cables and rods in construction.