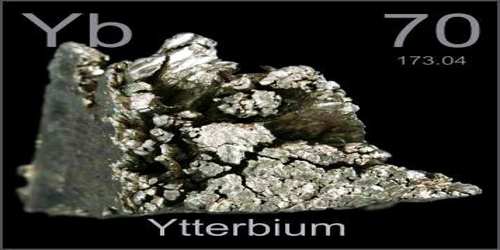 Ytterbium is a soft, silvery-white metallic element of the lanthanide series that occurs as seven stable isotopes with symbol Yb. Its atomic number 70; atomic weight 173.04; melting point 824°C; boiling point 1,196°C; specific gravity 6.972 or 6.54 (25°C) depending on allotropic form; valence 2, 3. It is used as an x-ray source for portable irradiation devices, in some laser materials, and in some special alloys. Ytterbium was isolated in 1878 by Jean Charles Galissard de Marignac at the University of Geneva. The story began with yttrium, discovered in 1794, which was contaminated with other rare-earth elements (aka lanthanoids). In 1843, erbium and terbium were extracted from it, and then in 1878, de Marignac separated ytterbium from erbium. He heated erbium nitrate until it decomposed and then extracted the residue with water and obtained two oxides: a red one which was erbium oxide, and a white one which he knew must be a new element, and this he named ytterbium. Even this was eventually shown to contain another rare earth, lutetium, in 1907.

Natural ytterbium is a mixture of seven stable isotopes, which altogether are present at concentrations of 3 parts per million. This element is mined in China, the United States, Brazil, and India in form of the minerals monazite, euxenite, and xenotime. The ytterbium concentration is low because it is found only among many other rare earth elements; moreover, it is among the least abundant.

A tiny amount of ytterbium metal was made in 1937 by heating ytterbium chloride and potassium together but was impure. Only in 1953 was a pure sample obtained.

Ytterbium is the most volatile rare-earth metal. It It is most often recovered commercially from monazite sand (0.03% ytterbium). The element is also found in euxenite and xenotime. The main mining areas are China, the United States, Brazil, India, Sri Lanka, and Australia. Reserves of ytterbium are estimated as one million tonnes. Ytterbium is normally difficult to separate from other rare earths, but ion-exchange and solvent extraction techniques developed in the mid- to late 20th century have simplified separation. Compounds of ytterbium are rare and have not yet been well characterized. The abundance of ytterbium in the Earth’s crust is about 3 mg/kg. Its elements can be classified based on their physical states (States of Matter) e.g. gas, solid or liquid. This element is a solid. Ytterbium is classified as an element in the Lanthanide series as one of the “Rare Earth Elements” which can located in Group 3 elements of the Periodic Table and in the 6th and 7th periods. The Rare Earth Elements are divided into the Lanthanide and Actinide series. The elements in the Lanthanide series closely resemble lanthanum, and one another, in their chemical and physical properties. Their compounds are used as catalysts in the production of petroleum and synthetic products.

Ytterbium is separated from other rare earths either by ion exchange or by reduction with sodium amalgam. In the latter method, a buffered acidic solution of trivalent rare earths is treated with molten sodium-mercury alloy, which reduces and dissolves Yb3+. The alloy is treated with hydrochloric acid. The metal is extracted from the solution as oxalate and converted to oxide by heating. The oxide is reduced to metal by heating with lanthanum, aluminium, cerium or zirconium in high vacuum. The metal is purified by sublimation and collected over a condensed plate. Ytterbium is beginning to find a variety of uses, such as in memory devices and tuneable lasers. It can also be used as an industrial catalyst and is increasingly being used to replace other catalysts considered to be too toxic and polluting. The element has little practical use beyond research. Radioactive Yb isotope is a source of hard X-rays useful in portable radiographic devices. It is used as a dopant in a variety of optical materials, including lenses. The metal is used in pressure sensors because its electrical resistivity is strongly pressure-dependent.