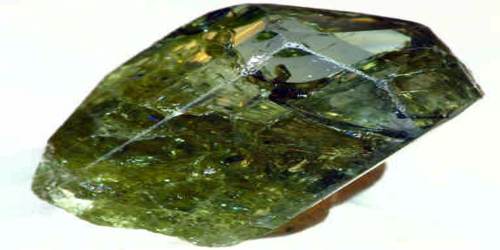 Zoisite is a grayish or whitish mineral occurring in orthorhombic, prismatic crystals, also in columnar masses. It is a silicate of alumina and lime, and is allied to epidote. Its chemical formula is Ca2Al3(SiO4)(Si2O7)O(OH). The most important and well-known is Tanzanite, a sensational blue gemstone. The variety Thulite is used as a minor pink gemstone. A variety known as Ruby Zoisite, which is green Zoisite associated with opaque red Ruby (and often black amphibole streaks), is used as a carving gemstone as well as a minor gem. The term Zoisite is rarely used on its own in the gemstone trade. Zoisite has been known for nearly two centuries as an ornamental stone. The stone was named after the Austrian scientist Sigmund Von Zois, who discovered it in the Saualpe Mountains of Carinth, Austria. Zoisite comes in a variety of colors such as gray, pink, lavender, pale-green or brown.

Occurrences, Propeprties and Uses of Zoisite

Zoisite occurs in many other colors, and another well-known form is the pink, manganese-rich variety called Thulite. Another interesting variety is the deep green massive form associated with contrasting red Ruby. Zoisite was named in 1805 after Austrian scientist and naturalist Baron Sigmund Zois von Edelstein (1747-1819), who had a notable mineral collection and identified Zoisite as being a unique mineral species.

Occurrences include Italy, Germany, Switzerland, Mexico, Scotland, and the United States (Massachusetts). Thulite, a manganous variety from Telemark, Norway, and Piedmont, Italy, is pink. Tanzanite, a gem variety from Tanzania, is vivid blue. The color of Tanzanite is rarely natural; it is almost heat treated from grayish or brownish hued stones. The heat treatment process removes unwanted color tints and strengthens the desirable blue. Zoisite has the same chemical formula as clinozoisite but has a different crystal structure. All varieties of zoisite have an orthorhombic crystalline structure, which is characterized by three mutually perpendicular axes that are unequal in length. Most often in contact metamorphic rock such as hornfels and gneiss, and in regional metamorphic schists. Occasionally also in granite pegmatites. The mineral is between 6 and 7 on the Mohs hardness scale, and its specific gravity ranges from 3.10 to 3.38, depending on the variety. It streaks white and is said to be brittle. Sources of zoisite include Tanzania (tanzanite), Kenya (anyolite), Norway (thulite), Switzerland, Austria, India, Pakistan, and the U.S. state of Washington.

Tanzanite is a very popular jewelry gemstone, faceted into all different gemstone cuts. Thulite is an inexpensive stone used for cabochons and beads. Green Zoisite and Ruby Zoisite are also used as cabochons and beads, and are popular material for ornamental figures such as animal carvings.