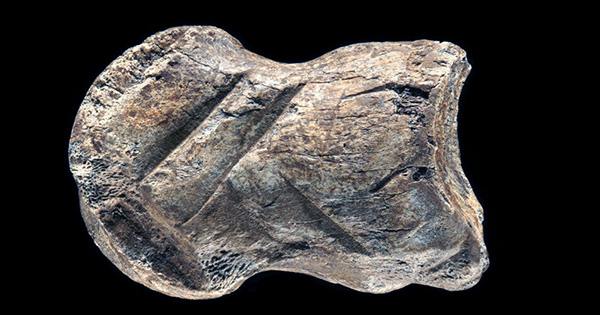 51,000-Year-Old Carved Bone Shows Neanderthals were Artists, Just Like us

Neanderthals are often portrayed as Homo sapiens’ heavy-brooding, labyrinthine “caveman” cousins ​​- all forgotten, no brain. However, a new discovery further highlights that this old figure is simply not accurate. Like Homo sapiens, Neanderthals created works of art about 50,000 years ago, showing that they have a clear understanding of abstract thinking and highly complex behavior. As published in the journal Nature Ecology and Evolution, the discovery came in the form of toe bones carved from an endangered Eurasian deer (Megalocheros gigantius), comparable to a conch in size.

At least 51,000 years ago, a radiocarbon bone was found at the entrance to a former cave at Einhornhöhle in Mount Herz, northern Germany. When this cave was discovered many centuries ago, a rumor started that it contained the remains of unicorns, but we now know that the most mysterious species in this was actually Neanderthals. The bones of the giant deer simply contain several straight incisions arranged artistically in a chevron pattern. It may not seem like a prehistoric masterpiece, but the creation of such objects requires a high level of conceptual imagination and cognitive ability. After all, we haven’t seen our closest living relatives chimpanzees engage in this kind of behavior.

Moreover, the Neanderthals seem to have used some complex skills to create this item. Microscopic analysis and experimental copying indicate that the bone was first boiled to soften before carving. The researchers also noted that giant deer were rare in the northern part of the Alps at this time, suggesting that the object had some special significance. Neanderthals lived in Eurasia about 430,000 to 40,000 years ago, although the earliest physically modern humans appeared about 300,000 years ago.

However, it is about 100,000 years ago that we did not see humans creating art and showing stored inventions. It started with shell bead ornaments about 100,000 years ago and finally snowed about 40,000 years ago in an explosion of carvings, cave paintings and other artistic exhibits. Neanderthals were previously thought to lack cognitive skills to pull off such complex events, but several discoveries in recent decades have shown that our extinct cousins ​​were probably on the same level with us.