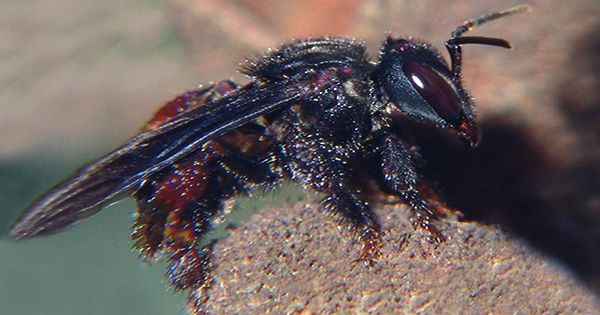 Do you want your bees to have greater sting? Costa Rica, it turns out, is home to a more abrasive species: the vulture bee. These insects, unlike the fuzzy vegetarians we have come to know and love, are carnivorous, with fangs and, as it turns out, guts to match. The guts of these beasties were investigated in depth in a report published in the journal mBio. Their research demonstrated that, in typical vulture fashion, these insects share gut microbiome elements with carrion-eating birds. The adaptation explains how these bees have evolved a taste for decaying carcasses and a tolerance for them.

The research (entitled “Why did the bee devour the chicken?”) is amusing. The study “Symbiont Gain, Loss, and Retention in the Vulture Bee Microbiome” gathered 159 bees that ate pollen, carrion, or a combination of the two, totaling 17 species from nine genera. They largely gathered using carrion and chicken as bait at the La Selva and Las Cruce’s field stations in Costa Rica.

The researchers made an interesting finding as they watched the meat-eaters flock to their putrid offers. The vulture bees kept meat in pockets, similar to how pollen-eating bees keep their foraging findings, according to UCR entomologist Quinn McFrederick in a release.

Vulture bees are considered to be “the only bees in the world that have evolved to use food sources other than those supplied by plants,” according to UC Riverside scientist Doug Yanega, who calls it “a very extraordinary alteration in dietary preferences.” It predicted, then, that their gut microbiomes would differ from those of honeybees, bumblebees, and stingless bees, which all have the same five core microorganisms in their stomachs. For the past 80 million years of evolution, bees have followed this trend. Do our vulture bees defy the odds?

“The microbiome of vulture bees is concentrated in acid-loving bacteria, which are unique microorganisms that their cousins lack,” McFrederick explained. “These bacteria are comparable to those seen in vultures, hyenas, and other carrion-feeders, and are thought to protect them against infections found on carrion.” That was not the only distinction that caught my attention.

“Even though they can’t sting, they aren’t all helpless, and many species are rather unpleasant,” Yanega explained. “They range from species that are truly harmless to numerous that bites, to a few that release blister-producing fluids in their jaws, causing the skin to erupt in painful blisters,” says the author. Despite their delicious diet and nasty conduct, vulture bee honey is said to be palatable and even sweet. However, if Bear Grylls’ transformation into Benedict Cumberbatch taught us anything, it is that the price of a little honey may sometimes be too costly.