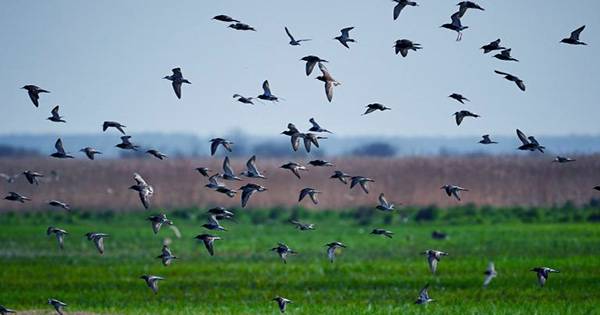 A new species of Early Cretaceous bird with remarkable tail feathers that were longer than its body has been discovered by researchers. Such enticing booty plumage has never been seen in dinosaurs or Mesozoic birds that aren’t members of Ornithuromorpha, the group that gave rise to all living birds. Its presence indicates that sexual selection was a powerful driving force in this species’ evolution, resulting in a body plan that favored fashion over function.

For the most part, evolution is about improving your fitness for a specific environment. That isn’t to suggest you have to be physically fit to adapt to your surroundings, whether it’s an angel shark’s flat, sand-colored body or nocturnal tarsiers’ big bug-eyes. Sexual selection, on the other hand, can sometimes get in the way of an animal’s physical performance in its environment, by adorning it with traits that, while alluring to potential mates, make life a little bit more laborious.

Pheasants and peacocks are excellent examples, with their massive, extravagant display feathers, which, while a successful courtship strategy (albeit not usually), make fleeing in flight a strenuous task. This trade-off between fitness and sexual success is underscored in new research published in Current Biology, in which a fossil of an Early Cretaceous bird with tail feathers 150 percent the length of its body is reported.

Enantiornithes were small, arboreal birds with many teeth that died out around 66 million years ago.

The discovery of Y. kompsosoura has piqued academic interest because it is the first time this combination of tail feathers has been described in a fossil Enantiornithes bird. Similar morphologies appear in ornithuromorphs that evolved independently, as seen in Archaeorhynchus and many extant birds.

Wearing elaborate gear is as much a symbol of privilege among animals as it is among humans because you can only value your attractiveness over your abilities to forage, run, and fight when resources are plentiful.

Jingmai O’Connor, the research author and paleontologist at Chicago’s Field Museum, told IFLScience, “A seabird has no cover and often needs to fly great distances without being able to land or has to land on water.” “Their plumage has been sculpted by their surroundings” (the white and greys make it hard for fish, their prey, to see them; their plumages have no ornaments because they are adapted to be efficient flyers and thus do not evolve ornaments that are detrimental to flight).